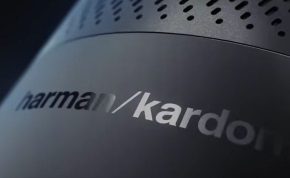 Invoke is crowned by a capacitive touch control panel and lighting effects mimic Cortana’s animated icon in Windows 10. The speakers are ringed by a microphone array to pick up voices from across a room.

Inside, the tweeter, woofer and passive radiator setup, the latter of which helps improve the speaker’s bass response, is engineered to provide room-filling sound when users want to set a soundtrack to their household tasks.

In terms of music streaming, supported music services include Spotify and iHeart Radio, with a Pandora integration in the works. Smart home partners include Nest, SmartThings, Wink and Philips Hue. Microsoft expects IFTTT, Uber, Ecobee and several other companies to make their services compatible with Invoke soon.

When linked to a Skype account loaded with paid Skype credits, Invoke allows users in the U.S. to make calls to mobile phones and landlines in the U.S., Canada, Mexico, Guam and Puerto Rico. As with the Skype apps and client software, Skype-to-Skype calls remain free.

Harman Kardon Invoke with Cortana is priced at $199.99 and will be available at Best Buy, HarmanKardon.com and at Microsoft Store. Color options boil down to black and white, or “Graphite and Pearl Silver.”

Invoke is entering an increasingly crowded device category that includes competition from Harman Kardon itself. The company is poised to release Harman Kardon Allure with Alexa later this year while sister company JBL prepares to launch its Link speaker featuring Google Assistant.

Sonos unveiled its new Sonos One speaker with Alexa support out of the box with Google Assistant support to follow in 2018. The company also released a new update that allows owners of the company’s other speakers to control their systems using an Amazon Echo, Echo Dot or other Alexa-enabled device.

On Oct. 19, Google began selling its affordable, puck-like Google Home Mini speaker ($49) and is gearing up for the December release of the larger Google Home Max ($399) with improved audio. To sweeten the deal, the company is offering Google Home Max buyers a free 12-month subscription to YouTube Music. Pixel 2 buyers, meanwhile, are entitled to a free Google Home Mini for a limited time.