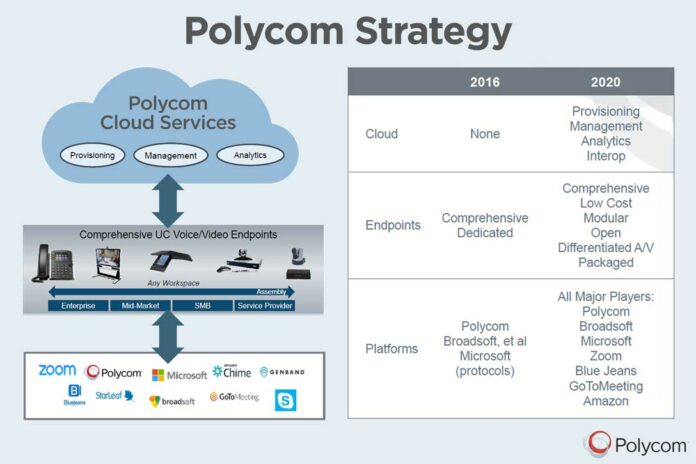 Polycom is expanding its cloud capabilities for enterprises and service providers as part of a larger strategic shift that started when the collaboration technology vendor became a private company in 2016.

Officials this week unveiled Polycom Cloud Services, a unified cloud strategy that initially is focusing on giving enterprises and service providers the tools to easily provision and manage the myriad voice and video endpoints that are in conference rooms around the world. The vendor’s Polycom Device Management Services (PDMS) is aimed at enabling enterprises to manage those devices, measure their performance and troubleshoot any issues that arise. With the service, customers are able to provision, update and secure tens of thousands of desk and conference room phones.

PDMS initially will be available for audio systems, but Polycom officials expect to expand its support to video conferencing devices by the end of the year.

Polycom also will continue to add cloud services as the year goes on, and will continue to work with such public cloud providers as long-time partner Microsoft Azure and Amazon Web Services (AWS) to expand the company’s services that are running on those cloud infrastructures, according to CEO Mary McDowell. In addition, the company will work to add natural language processing—like Microsoft’s Cortana and AWS’ Alexa software—and other artificial intelligence (AI) capabilities to its devices and services to simplify the process of starting and managing meetings.

The cloud effort has been a focus of Polycom’s since McDowell took over as CEO in 2016, when the company was bought by private equity firm Siris Capital for $2 billion. McDowell said that at the time, Polycom had a strong brand and customer base, but that it was “a little bit stalled in the marketplace” as the unified communications and collaboration industry shifted strongly to the cloud. A number of pure-play cloud collaboration companies like Zoom and BlueJeans Network had gained market share.

“The market was starting to evolve to these cloud-based video solutions, and Polycom didn’t have an entry of its own and viewed these players essentially as competitors,” she told eWEEK. “The first thing we set out to do was flip the orientation and say, ‘What if we can harness ourselves to the growth rate of a company like a Zoom or a Blue Jeans, and if they have great capabilities in the cloud, we can still own the meeting room and the experiences that come through value-added endpoints in the meeting room.”

The cloud strategy calls for Polycom to provide a broad portfolio of audio and video endpoints for enterprises, midmarket companies, SMBs, and service providers, as well as management, provisioning and analytics services that customers can use with a growing number of cloud partners, including Microsoft, Amazon, Zoom, BlueJeans, GoToMeeting, GenBand and BroadSoft, which was bought by Cisco Systems in February.

McDowell said enterprises use a variety of cloud collaboration vendors throughout the day, so it’s important that Polycom devices support a wide range of them. Service provider customers like Comcast, 8×8 and RingCentral “have their own tools for managing their network and service, so the capabilities we have with these devices are very complementary because they can now have that ‘last mile’ view of what’s going on with the device itself,” the CEO said.

The enterprise PDMS offering was developed in-house, but the version aimed at service providers in large part was based on voice-over-IP (VoIP) technology that Polycom inherited when it bought Obihai Technology in January.

McDowell said becoming a private company two years ago was crucial to enabling Polycom to making the necessary strategic changes. Her comments echoed those of Dell Technologies CEO Michael Dell after he spent $24 billion to take his company private. Dell spoke about being able to focus on long-term plans and innovation without having to worry about meeting quarterly financial numbers.

“The strategic pivot to a deeper engagement with Microsoft and new relationships with Zoom and BlueJeans and other partners would have been very difficult to pull off in a public company setting because … the benefits are not realized in a 90-day window,” McDowell said. “You need time to strike the partnerships, do the engineering work, sort out the go-to-market [strategy]. This was work we started almost immediately in the end of 2016 and is now really bearing fruit. That would have been difficult to do with the quarterly pressures.”

The changes will keep coming for Polycom. Platronics, which makes such peripherals as audio headsets and microphones, is expected to close its $2 billion acquisition of Polycom in the third quarter.