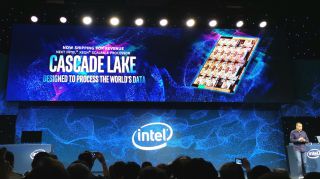 Shiny new startups are so central to the tech industry’s culture and sense of self-worth that folks often neglect or even disparage larger, better-established vendors. That’s dumb for any number of reasons, but high on the list is that it misses a key issue: the critical importance of self-reinvention in tech firms’ long-term survival.

Constantly moving and reevaluating, developing and delivering substantial innovations month after month, year after year, decade after decade is what successful vendors do. That point was in clear view during Intel’s recent launch of its 2nd generation Xeon Scalable processors (aka “Cascade Lake”) and other new “data-centric” solutions.

Let’s consider those offerings, why they are important and how they will help keep Intel and its OEM customers riding high in data center markets.

Cascade Lake and Beyond

What did Intel announce in the launch?

Pricing for the new solutions was not revealed during the launch. Product availability details can be found here.

Intel’s 2nd-Generation Xeon Scalable processors and other data-centric offerings arrive at an odd time for the company. The conventionally wise tend to portray Intel as an overly complacent dinosaur harassed and bloodied by swifter, more agile (and typically far smaller) velociraptors. Critics say the company reacts too slowly to marketplace shifts and is being surpassed by more innovative vendors and technologies.

During the past year Intel hasn’t done itself any favors. After unexpectedly dismissing its CEO, Brian Krzanich, it spent months searching for a new chief executive before deciding to formally give interim CEO Robert Swan (who joined Intel in 2016 as its CFO) the job.

Then again, the company was at the top of its game in other cases. For example, the discovery of the Spectre, Foreshadow and other side channel vulnerabilities in Intel chips could have been a public relations nightmare on the scale of the 1994 Pentium FDIV bug. Instead, Intel’s willingness to take responsibility and transparently detail its efforts to correct the problem kept the situation from blowing out of proportion.

Despite these challenges, Intel continued to deliver steady, often impressive financial performance. While the company is no investor’s idea of a high flyer, it also had less distance to fall and enjoyed considerable padding to mitigate unplanned impacts. The value of Intel’s approach became apparent when GPU-focused NVIDIA saw its fortunes swoon and share prices plummet in 2H 2018 when crypto-currency markets unexpectedly tumbled.

So, what does this new data center portfolio say about Intel? First, consider the sheer breadth of products. Along with the latest/greatest features/functions that you’d expect in a next-gen Xeon announcement, the new SoC, FPGA and Optane memory and storage solutions, as well as workload-specific technologies, such as Intel DL Boost, demonstrate how fully and effectively Intel is spreading its data-centric bets.

Also impressive is the portfolio’s depth. That’s clear in the 50+ SKUs that feature 2nd-gen Xeon Scalable silicon and is highlighted by the new 56 core/12 memory channel Xeon Platinum 9200. That IBM Cloud and Google Cloud, both of which focus on the needs of enterprise cloud customers and are sticklers for top-end hardware performance, proactively announced support for the chips is worth noting. In fact, is suggests that Intel’s claims about the 9200’s HPC, AI and high-density capabilities are fully justified.

Finally, consider the flexibility and customizability of the new offerings. Intel’s focus on workload-specific solutions reflects OEMs’ (and their customers) increasing interest in integrated, optimized systems. In fact, the new custom processors that resulted from Intel’s collaboration with communications service providers show how Intel can and likely will continue to add discrete new value to its portfolio.

In short, Intel’s new 2nd-Generation Xeon Scalable processors and other offerings clearly demonstrate Intel’s ability to deliver substantial new innovations. That’s sensible from a tactical standpoint since the company’s competitors aren’t standing idly by. However, it’s also strategically important for Intel to show how it became a leader in data-center solutions in the first place and why it deserves to remain there.

The tech industry’s love for high flying start-ups and shiny new objects won’t fade any time soon. However, it would be a mistake to believe that leading-edge imagination and innovation reside solely in smaller organizations. Intel’s new “data-centric” 2nd-Generation Xeon Scalable, Agelix and Optane solutions demonstrate how the most innovative vendor you can find is often the one you’ve known and worked with for years.