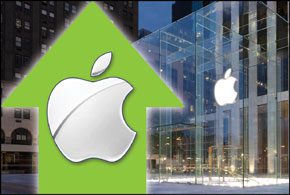 Apple says it’s preparing to launch a massive business investment program that promises to make the company bigger than ever and become an even more powerful force in consumer and enterprise information technology.

This is going to happen because Apple announced today that the company is planning business investments that will contribute more than $350 billion to the U.S. economy over the next five years.

This includes capital expenditures over $30 billion, the creation of over 20,000 new jobs at existing Apple locations as well as at a new campus to be built at a new location. Apple also plans to spend $10 billion to build new data centers around the U.S.

There’s also $5 billion planned for Apple’s Advanced Manufacturing Fund, which is being used to support the development of innovative manufacturing technology at U.S. companies. The company also plans to expand its support for STEAM (science, technology, engineering, arts and math) education throughout the U.S.

This massive expansion on Apple’s part is due in part to the recent change in tax laws enacted by Congress at the end of 2017 that is allowing the company to repatriate more than $250 billion in cash from overseas earnings in return for paying federal taxes of $38 billion. Apple says it’s probably the largest single corporate tax payment ever.

This massive infusion of cash will certainly help those communities where Apple already has operations, but the impact is sure to go beyond that. Apple’s presence as the largest company in the U.S. with a market capitalization of $919 billion, gives it outsize influence in the U.S. economy in general, and in the technology sector in particular.

But the greatest influence is actually beyond setting the stage for specific products. Apple will be influencing education in even greater ways than it has in the past and it’s going to provide a workplace for thousands of technology workers and thousands more in supporting roles ranging from marketing to food service. Over time Apple’s influence will come to companies far beyond Apple headquarters.

Of course, many of those newly-hired Apple engineers will eventually move on to companies outside of Apple as well. This means that the Apple way of doing things will spread, much like the influence of Microsoft engineering spread 20 or so years ago.

Think of the role that IBM had in second half of the 20th Century. In those days, enterprises used IBM products, they adopted IBM’s business processes and they used IBM’s language in to manage enterprises. That time is long gone, but new companies, notably Apple, Amazon and Google are showing what it takes to build enormously successful businesses in the 21st Century.

Considering the effort and expense that Apple is committing, you can expect to see Apple’s influence not just in the IT technology your organization uses, but in how your enterprise works.

If this seems a bit over the top, remember that Apple is by far the largest technology company in the U.S. While Microsoft, which has the dominant software platform world wide in Windows, is big and influential, there’s nothing exclusive about it. Microsoft and Apple can coexist in the same environment. Alphabet is big and with Google it’s influential, but again, nothing about Alphabet precludes Apple.

Unlike IBM’s one-time dominance, however, it doesn’t appear that Apple is likely to take the aggressive approach at wiping out perceived competitive threats at every turn. Instead, Apple seems to be finding ways to work with perceived competitors, in the process expanding the Apple approach to the enterprise.

This isn’t to suggest that Apple will take over the world, because that isn’t likely. Linux and Microsoft still own the cloud and there is no indication that Apple is planning to compete in that arena. But it does look as if your enterprise will become more Apple flavored in ways that couldn’t be imagined back when the company was mainly selling Macs and iPods.

As long as Apple tries to be an ethical, employee-friendly company that tries to improve life the communities where its operations are concentrated, the company business development plans could help keep the country on a growth path for years to come.