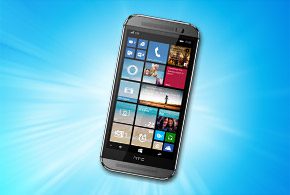 AT&T and Verizon Wireless are each adding a Windows Phone 8.1 version of the HTC One M8 smartphone to their consumer device lines as they expand their Windows Phone lineups.

The availability of the same phone model that gives customers the choice between two competing operating systems was highlighted by HTC as “the first time an iconic flagship device offers multiple operating systems” in its Verizon announcement.

The new Verizon phone is available immediately in stores and online for a promotional price of $99.99 with a new two-year contract for a limited time, or for $29.99 per month on the Verizon Edge plan, according to HTC. The phones are also available through Microsoft Stores with Verizon Wireless service and a special offer for a free HTC Dot View Case and screen protector for $25.

AT&T said it will release details on pricing and availability at a later date.

“Consumers love the HTC One (M8), and today’s introduction extends that enthusiasm to new audiences hungry for choice in their mobile experience,” said Jason Mackenzie, president of HTC Americas. “HTC fills a gap in the market for unique devices that put a premium on form and function. Microsoft shares our vision, and that’s why we committed to bringing the Windows Phone platform to the HTC One (M8).”

Included in the latest Windows Phone 8.1 update is the Cortana personal digital assistant, which can help users with appointments, flight times, errands and much more.

AT&T customers can sign up to be notified when the HTC One M8 will be released and available for purchase, according to the company.

The Android version of the HTC One M8 debuted in March at events in New York and London, according to an earlier eWEEK report. The M8 is a looker, featuring a unique metal unibody that wraps around the phone’s rounded corners and tapered edges, right up to its display. The metal on its predecessor, the M7, for reasons of antenna usefulness, didn’t wrap up so far, leaving room for a bit of polycarbonate.

The M8 pairs Android with the sixth version of its sensor-rich, more-intuitive-than-ever Sense user interface. HTC added improvements to BlinkFeed, to make it more of a user resource; improved BoomSound, making the M8’s sound 25 percent louder than the M7’s; made the front camera a 5-megapixel wide-angle, for way better selfies; and, in a smartphone first, put a “Duo Camera” on the back, along with a depth sensor and a dual flash, for all together better results in low light and capabilities that have been the domain of professional cameras.