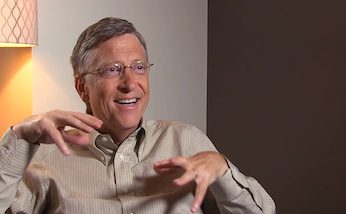 Microsoft co-founder and current Chairman Bill Gates sat down with some cameras rolling for the Next at Microsoft blog to discuss the opportunity of the week—and months—ahead for Microsoft.

On Friday, Oct. 26, Microsoft will launch its Windows 8 software and Surface RT tablet and three days later its Windows Phone 8 (WP 8) mobile operating system—products that will not only throw open the doors for dozens of new products to pass through but, Microsoft hopes, will changes its position in the industry, if not also the industry.

“This is an absolutely critical product,” Gates said of Windows 8, noting that CEO Steve Ballmer has said the same. “It takes Windows into the world of touch, low-powered devices, really giving people the best of what you think of as a tablet-type experience and the PC experience. … It’s a big step. It’s key to where personal computing is going.”

Windows 8 and WP 8 share a design, a user interface, development tools and more—a strategy that’s clearly meant to create synergies between Windows 8 tablets, smartphones and PCs and a level of comfort that Microsoft rival Apple’s users are accustomed to, moving intuitively between Macs, iPads and iPhones. Ballmer has been vocal about not giving Apple an inch—about Microsoft’s need to compete in every area that Apple does.

Gates added that the consistencies between the operating systems will also enable them to evolve into “literally a single platform.”

“This is a big opportunity in terms of connecting to cloud services,” Gates continued. “Windows 8, Windows Phone 8 and the new version of Office, they all go get their storage, go get your personalization … when it works, you just go, ‘Wow!'”

With the iPhone, Apple acquainted the world with the touch-based user interface, and Microsoft has been working to take the concept of input further. The new platforms are very touch-centric, but more, they’re part of a “natural user interface” (NUI) idea that’s been an ongoing interest for Microsoft.

Writing in his personal blog in October 2011, Gates enthused about the “power of the natural user interface” in regard to Microsoft’s Kinect for Xbox 360.

“Kinect is a remarkable technical achievement,” Gates wrote. “The ability to take video cameras, multi-array microphones, and depth sensors and bring them all together in order to recognize people, understand and anticipate how they move, incorporate voice recognition, and insert them into games—all at 30 frames per second—is phenomenal.”

Touch is important to easy content consumption, Gates told the Next blog, “But you want to incorporate touch without giving up the kind of mouse-keyboard capability that is so natural in most settings. Microsoft is blending all the different kinds of input. Speech input, camera input, we have this umbrella—NUI —that talks about bringing them all in so that you can use them, even in one single experience with one device. You can use them all.”

The Surface tablet, which has a built-in kickstand, is also notable for being one of the few pieces of hardware to come directly from the software maker. The ARM-based RT version is priced in line with the Apple iPad; a 32GB version is priced at $499 without a cover and $599 with it. The covers further distinguish the Surface, since they feature either touch or mechanical keyboards.

In three months, Microsoft will launch a Surface running Windows Pro 8 for x86-based processors—a fact that’s likely to slow sales of the Surface RT, according to analysts.

“I think [enterprises] are going to sit this one out and wait for the x86 version and get the full compatibility on the desktop side,” Gartner Research Vice President Carolina Milanesi has told eWEEK.

Gates, who received one of the first Surface tablets off the line, said he is enthusiastic about the tablet and finds it’s notable for additional reasons.

“It’s an unbelievably great product … When you show people that hinge—you can’t appreciate it without seeing it. People, get to a store, play around with this thing,” Gates said, offering a message to the camera. “The way you put that keyboard on and off, the richness of the swiping that takes the touch interface to a new level, just the beauty of the device—it is absolutely incredible.”