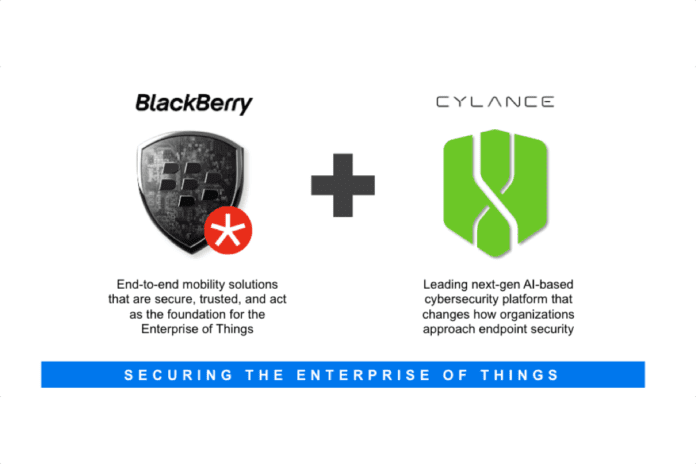 A week after the first rumors of the acquisition began to surface, BlackBerry confirmed on Nov. 16 that it is acquiring cyber-security vendor Cylance for $1.4 billion in cash.

The deal is expected to close before BlackBerry’s fiscal year end in February 2019. Cylance is best known for its suite of endpoint detection and response (EDR) security capabilities, including the company’s Protect, Optics, ThreatZero and Smart Antivirus products.

“Cylance’s leadership in artificial intelligence and cybersecurity will immediately complement our entire portfolio, UEM and QNX in particular,” John Chen, executive chairman and CEO of BlackBerry, wrote in a statement. “We believe adding Cylance’s capabilities to our trusted advantages in privacy, secure mobility, and embedded systems will make BlackBerry Spark indispensable to realizing the Enterprise of Things.”

Cylance was founded in 2012 and had raised approximately $297 million in funding. In July 2015, when the company raised its $42 million Series C round of funding, CEO and co-founder Stuart McClure told eWEEK that he expected the company to continue to grow, which it has.

The company’s core Protect platform is a next-generation endpoint security technology. Cylance Protect uses predictive modeling to help organizations identify and protect against risks, according to McClure. In May 2017, Cylance announced its Optics platform, providing threat hunting capabilities. Optics provides an additional layer of instrumentation on top of the Cylance Protect prevention technology. In August 2017, the company first expanded into the home market, with a product known now as Smart Antivirus.

“Our highly skilled cybersecurity workforce and market leadership in next-generation endpoint solutions will be a perfect fit within BlackBerry where our customers, teams and technologies will gain immediate benefits from BlackBerry’s global reach,” McClure wrote in a statement. “We are eager to leverage BlackBerry’s mobility and security strengths to adapt our advanced AI technology to deliver a single platform.”

BlackBerry has been undergoing a disruptive transition in recent years as its smartphone business faced increasing pressure from Google Android and Apple iOS. As the Canadian company exited the smartphone business, it has increasingly invested in cyber-security. At an Oct. 4 event, the company announced new quantum encryption capabilities for its Spark security platform.