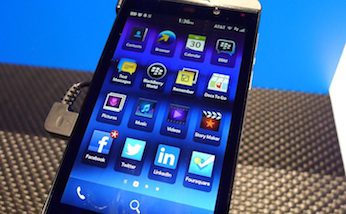 BlackBerry CEO Thorsten Heins continues to trickle out details of his company’s plans to regain smartphone market share from Apple and Android-running competitors.

“In order to stay relevant, we have to build a portfolio,” Heins said, according to a March 31 report from The Globe and Mail.

The entry-level devices will run BlackBerry’s new BlackBerry 10 operating system and be designed for markets such as India and Indonesia—markets that, during the very long wait for BlackBerry 10’s launch, helped sustain the company as U.S. subscriber numbers fell off.

With BlackBerry 10 and new smartphones that (unlike earlier BlackBerry handsets) address both enterprise and consumer desires, the company is working to win back U.S. consumers, though clearly, it’s also aware of the need to keep courting them elsewhere as well.

A more diversified BlackBerry lineup suggests that BlackBerry, like Apple, is learning that one can’t rest on its laurels. (BlackBerry hasn’t done much resting lately, but executives have acknowledged that over-confidence in the past contributed to the situation it’s in today, with low single-digit market share.)

The new report is in line with Piper Jaffray analyst Gene Munster’s February forecast that Apple will debut an unlocked $199 iPhone during the third quarter.

“We believe a lower-priced iPhone will be a positive for [Apple] shares,” wrote Munster, adding that the phone “should accelerate gross profit growth, given the size of the low-end market (we estimate $135 billion in 2013).”

In a December 2012 research note, Canaccord Genuity analyst T. Michael Walkley said he also expects that Apple is working on an iPhone 5 refresh—the Electronista report similarly calls it a “polishing revision” of the iPhone 5—along with a mid-tier-priced iPhone “for prepaid oriented international markets this summer.”

Even more than Apple, BlackBerry can’t afford to pass up the $135 billion market identified by Piper Jaffray.

BlackBerry posted an unexpected profit during its fiscal 2013 fourth quarter and shipped about 1 million of its new Z10 smartphones running BlackBerry 10, it announced March 28. The phone went on sale in the United States March 28, though, well after the quarter closed March 2.

Still, in working to appeal to consumers instead of enterprise users, the company expects to see service revenues decline.

During the earnings call, Heins said that BlackBerry will release another round of BlackBerry 7 devices, which are popular in Asia-Pacific, the Middle East, Africa and parts of Europe, in addition to the new BlackBerry 10 smartphones.

“We’re building a full portfolio,” Heins said. “BlackBerry 10, from a technology perspective, is starting in the high end. We will bring it into the mid-tier by the middle of the fiscal year, and then we are working toward … what we can do in what we typically call the BlackBerry entry level. So, stay tuned on that one. There’s work going on there as well.”