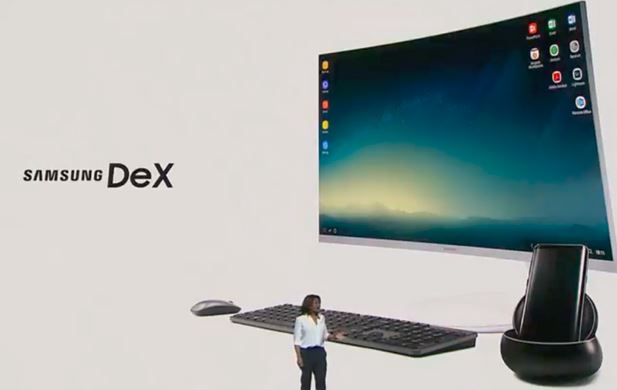 Sometime later in Q2 2017, owners of the new Samsung Galaxy 8 smartphone will be able to use it as a virtual desktop running on the Citrix platform if they so choose.

Samsung and Citrix announced March 30 at a press event in New York that they are connecting the new Samsung DeX dock to Citrix’s Receiver software. This converts the Galaxy S8 into a desktop environment that includes an optimized UI for multi-tasking with keyboard and mouse support, resizable window capabilities and task bar pop-up notifications.

The DeX dock will cost $150 and ships in late April, the company said. In addition to its USB and HDMI ports, it also has an Ethernet 3.0 jack.

As enterprises increasingly embrace mobile business strategies, people continue to carry as many as three devices with them, including laptops, smartphones and tablets. Connecting the smartphone with the desktop dock is aimed at simplifying device usage.

The combination of Citrix and Samsung DeX unboxes the phone and provides employees with secure access to their digital workspace and all of the business apps and data they need to get their work done, Samsung said.

In addition to the preferred solution that combines Citrix innovation with Samsung DeX, Citrix said it also offers support and integration for Samsung devices that include XenMobile enterprise mobility management, security features and secure virtual access to apps and desktops through XenApp and XenDesktop. It also offers support for Secure Apps with Samsung Knox at the native Android OS layer.

Citrix XenMobile also supports new Samsung capability known as Enterprise Firmware-Over-The-Air (E-FOTA). Samsung E-FOTA enables IT admins to take greater control over when devices get updated, as well as what version is updated. This Samsung capability provides IT with native device control without sacrificing user flexibility, the company said.

“While many people use their smartphones for business, they usually turn to a laptop or desktop when they need to use Windows or browser-based apps,” said Maribel Lopez, founder and principal analyst, Lopez Research. “Even though VDI or app virtualization lets them run Windows applications on their smartphone, the Windows experience does not always translate well to a small touchscreen.

“To address this issue, vendors have worked to develop solutions that make it easier to connect smartphones to a keyboard, mouse and a monitor. The solution that succeeds has significant market potential.”

The Samsung Galaxy S8 smartphone and Samsung DeX will be available in Q2 2017, the company said.