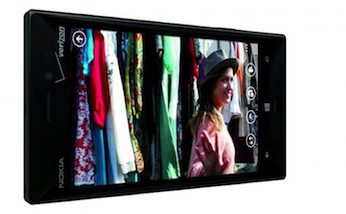 Handset manufacturer Nokia announced the impending launch of the Lumia 928 smartphone, the latest installment in the company’s Windows Phone 8 lineup, which will be an exclusive to Verizon Wireless and will debut in the United States May 16.

The handset features a 4.5-in. OLED display, which extends to the edge of the phone, and runs Microsoft’s Windows Phone 8 operating system, which features a start screen that can be arranged to reflect individual priorities and animated Live Tiles for real-time updates on people and things.

The Lumia 928 is available in white or black at Verizon Wireless stores and online, beginning May 16 for $99 after a $50 mail-in rebate, with a new two-year customer agreement. For a limited time, users will also get a $25 credit for Windows Phone apps and games with the purchase of a Lumia 928, a company release noted.

The focus for this smartphone seems firmly fixed on the camera, which features Nokia’s PureView imaging innovation, including optical image stabilization, that lets users capture blur-free photos and videos, even in low light conditions (such as indoors or at night). The 8.7-megapixel camera features a wide-angle Carl Zeiss lens and a Xenon flash.

Nokia has also paid particular attention to the audio and video capabilities on the Lumia 928, offering distortion-free audio capture, even in noisy conditions. Built with three high-audio-amplitude-capture (HAAC) microphones and an advanced loudspeaker, users can record and play back sounds all the way up to 140 decibels, which is the sound equivalent of an airplane taking off. These features can also be enhanced when using Vyclone, an app for Windows Phone that lets users co-create, sync and edit multiple views of a shared moment.

The Lumia 928 also comes with built-in wireless charging and includes access to Lumia applications, including the complete set of Here experiences, such as Here Maps, Here Drive+, Here Transit and Here City Lens, which help users navigate their surroundings. Using Nokia Music with Mix Radio, users can access unlimited streaming of free music playlists with the option to create personal playlists and download for listening offline. Digital camera lenses and apps, including Smart Shoot, Cinemagraph, Panorama and Photobeamer, round out the package.

Windows Phone 8 is built to work seamlessly with Windows PCs and tablets, Microsoft Surface devices and the Xbox 360 console so that files, music, pictures and videos can be accessed in whichever way is most convenient. The Windows Phone Store features more than 145,000 apps for users to choose from, and they can access the Web using Internet Explorer 10, offering integration with Microsoft Office Mobile.

“Whether you’re attending a party, a concert or a sporting event with friends, the Nokia Lumia 928 excels at capturing high-quality video, audio and blur-free photos of life’s most share-worthy moments,” Matt Rothschild, vice president of Nokia North America, said in a statement. “Verizon Wireless customers, we heard you and the wait is over—we’re excited to offer a Nokia flagship smartphone, specially designed and optimized for the nation’s largest 4G [Long Term Evolution] LTE network.”