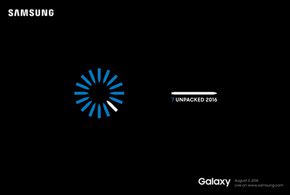 Since Samsung rolled out its Galaxy S7 and S7 Edge flagship smartphones in March, the company has been noticeably mum about a successor to its larger Galaxy Note 5 phablet, which has been out since August 2015.

That’s now changed as Samsung has finally revealed plans to showcase its upcoming Galaxy Note 7 phablet in a flashy “Samsung Galaxy Unpacked” event at 11 a.m. EDT in New York on Aug. 2. The company announced the event on its Website and in an email to eWEEK.

No specifications or other details about the next-generation Note 7 were included in the announcement, so there is no way to know yet how different it might be from the earlier Note 5. The Note 7, however, will likely borrow much of its technology from the Galaxy S7 and S7 Edge models, which have been selling well. The Note series handsets include Samsung’s built-in S Pen and a large screen, which allow users to “write” on the display to capture drawings, text and more.

Samsung did say that it named the new device as a Note 7, skipping over the potential Note 6 name, because the Galaxy Note 7 complements the latest Galaxy S7 and S7 Edge models, and will unify the model nomenclature for the products.

The New York announcement of the Galaxy Note 7 will be live-streamed, the company said.

The existing Galaxy Note 5 smartphone has a 5.7-inch quad HD Super AMOLED display, 4GB of RAM, an octa-core Exynos 7420 processor, a 16-megapixel rear-facing camera, a 5MP front camera and comes in versions with 32GB or 64GB of built-in storage.

Samsung’s latest Galaxy S7 and S7 Edge smartphones, which will likely be the basis for much of the Note 7’s underpinnings, are powered by Qualcomm quad-core 2.15GHz and 1.6GHz processors for U.S. users and include 4GB of LPDDR4 memory, 32GB of built-in storage and microSD expansion slots that support storage cards up to 200GB. Both phones are water-resistant and include Samsung’s first “dual-pixel” cameras, which capture rich low-light images. Both the Galaxy S7 and the Galaxy S7 Edge include rear 12-megapixel cameras with F1.7 lenses and smart optical image stabilization as well as 5-megapixel front-facing cameras.

Samsung’s latest Galaxy handset, the Galaxy S7 Active, a ruggedized version of the S7, was released in June, exclusively through AT&T, according to a recent eWEEK report. The handset follows the ruggedized Galaxy S6 Active that launched in mid-2015, but gains a bevy of improvements taken from the latest Galaxy S7 and S7 Edge phones. The Galaxy S7 Active has a shatter-resistant and water-resistant 5.1-inch Super AMOLED Quad HD touch-screen display and meets IP68 certification to withstand water exposure of up to 5 feet for 30 minutes. Aimed at users who work and use their phones in hostile environmental and physical conditions, the S7 Active also meets MIL-STD-810G specifications for dirt, dust, temperature, shock and salt resistance. The 5.1-inch display is the same size as the one found on the Galaxy S7 handset. The phone is priced at $795.

In recent testing by Consumer Reports, however, two of the new Galaxy S7 Active smartphones failed separate water-submersion tests, causing the phones to stop working and the magazine to call out Samsung about the alleged problems. In a post on its own Website, Samsung responded to the Consumer Reports article on July 8 by saying that the S7 Active is “IP68 certified for water resistance and has gone through strict quality assurance testing to ensure that it meets and exceeds industry standards. We are currently speaking with Consumer Reports to understand their experience and will closely explore their feedback.”