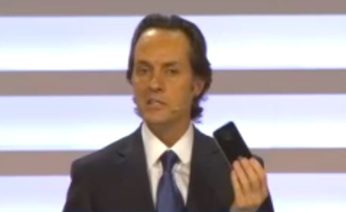 T-Mobile next year will begin offering the Apple iPhone in a way that the industry hasn’t seen before, T-Mobile CEO John Legere shared at parent-company Deutsche Telekom’s Capital Markets Day in Germany Dec. 6.

The nation’s fourth-largest carrier—which has been struggling due to having neither an iPhone nor an LTE network, as well as from a year in limbo, as AT&T tried, ultimately unsuccessfully, to acquire it—also plans to “aggressively target AT&T.”

On stage at the event, Legere explained that he was combining his discussions about being a “value leader” and a “trusted brand” because “this is fundamentally going to be the area where we innovate,” he said. “We’re going to innovate on a few things. We’re going to innovate on value plans [and on offering] amazingly affordable hero devices. We are going to get devices into the market, including this one”—and here he quickly held up what appeared to be an iPhone 4S—”at a price that beats the rest of the industry.”

On the bright side, sans iPhone, T-Mobile had become “an incredible sales machine of the other very competitive devices,” said Legere. But there was no denying what was missing.

“A certain number of customers wouldn’t come to the store if we didn’t have the iPhone,” he said. “It was just a definite churn impact, and we worked very, very hard on a deal that makes sense for us.”

What makes sense for T-Mobile, Legere suggested, is an entirely new paradigm.

“This is very, very different from what’s happened previously. And well worth the strategic wait. …. This is not a volume commitment the size of what Sprint agreed, to or anything close to it. And I can guarantee you … when this device rolls out, it will be a different experience.”

Part of that difference is T-Mobile’s intention to move, in 2013, to 100 percent Value Plans, which he said is what 80 percent of new customers are already choosing. Different from contract-free plans, Value Plans include scenarios where a customer can come to the carrier with a device they’re already very happy with and simply sign up for service. Or, they can include the offer of financing, so that a customer can pay for the device over time, with very a low up-front cost. They also mean that a customer can upgrade at any time.

“What we’re finding is, right now, customers are really still pissed off at very unpredictable billing, very unclear pricing, restrictive and confusing upgrades and unfair treatment of loyal customers, and this whole way that we sell them a phone and bury the costs into a long-term contract and tie them in,” said Legere. “We think there is huge room for a challenger to change some of that in a way that the larger players will not be able to, or will choose not to, respond to.”

Regarding the Value Plans he went on to explain, “You may pay $99 for the most iconic device in the world, and then you may get 20 months’ worth of, call it $15 to $20 a month. It’s very cheap out of pocket, very low. And at any point if you want to come back and trade in that phone, we will give you residual value. We will let you trade in that phone and stay on the contract service you have.”

As the Value Plans save T-Mobile from having to subsidize the iPhone, Legere said that T-Mobile will make a profit on its iPhones in the first year that they’re offered—whereas Sprint, which committed to $15.5 billion worth of iPhones upfront, won’t make a profit on its 2011 sales until 2015.

Regarding T-Mobile’s LTE deployment plans, Legere said they are already ahead of schedule.

“We have significantly accelerated our deployment of LTE, for a number of reasons, and by mid year we will have 100 million pops already and then by the end of the year a really smokin’ network of 200 [million], 225 million in the key areas of 3G and LTE.”