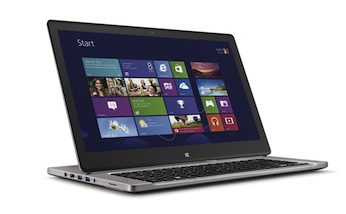 Computer maker Acer announced a host of personal computers running Microsoft’s Windows 8 operating system at a press event in New York City on May 3, including the Aspire R7, a 15.6-inch notebook which features what the company calls an Ezel Hinge, which allows the device to be used as a traditional laptop or like a tablet sitting on a table.

The hinge enables the PC to move its HD display forward and into four different modes: Ezel Mode, Notebook Mode, Display Mode and Pad Mode. With Ezel Mode, for example, the display can float over the keyboard at various angles. The dual hinge technology allows for single-hand switching between the four modes and keeps the display steady when touched–the idea is that this hinge can make the combination of touching the screen and using the keyboard more intuitive and natural.

The Aspire R7 will be available on May 17 for the suggested price of $999.99, and also features an Intel Core i5 processor, 6GB of memory, a 500GB hard drive and 24GB solid state drive (SSD), a full-size backlit keyboard, an HDMI port, SD card reader, 3 USB ports, and WiFi and Bluetooth capability.

The Aspire P3, which weighs 3.06 pounds and measures 0.77-inches thin, is an Ultrabook that can transform into a tablet mode, and features an 11.6-inch HD display with touch and IPS technology for a wide 170-degree viewing angle. The notebook is available with Intel Core i3 and Core i5 processors, offers up to 6 hours of battery life and is available with either a 60GB or 120GB SSD.

The Aspire P3 is currently available starting at a suggested price of $799.99, and also features Dolby Home Theater technology, which boosts sound for headphones as well as built-in speakers, a USB 3.0 port and HDMI port, a built-in Acer Crystal Eye HD webcam in the front that can capture 720p HD, and a 5 megapixel rear camera, a full-size chiclet keyboard and an optional stylus that fits in the case for customers who want the availability of pen-based input.

Rounding out the list of announcements was the V Series, which represents Acer’s biggest line of mainstream Windows 8 laptops, with numerous models and a variety of options. The V Series PCs are up to 9 percent slimmer than the previous generation and come with full HD displays, more powerful graphics, SSDs, and will be available at the end of May starting at the suggested price of $499.

The V5 series models are available with a choice of touch- or non-touch screens, and all V5 models with touch-screen configurations will also include backlit keyboards. Available with 15.6-inch or 14-inch displays, the notebooks are equipped with AMD dual core or quad core processors, or Intel processors, and select configurations are offered with Nvidia GeForce GT7XXM series or AMD Radeon HD8750 discrete graphics.

All V5 Series notebooks include an Acer Converter Port, making it possible to connect to an external display, hard drive or router. The V7 series of Ultrabook models include a variety of Intel processors, SSDs, Acer Theft Shield, the Converter Port and WiDi, Intel’s Wireless Display technology.