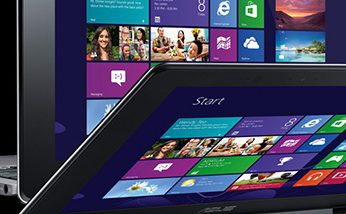 Consumers who were hoping to lay their hands on the Asus Taichi dual-screen Ultrabook will be disappointed to learn the computer maker has delayed shipments of the notebook to the United States.
Although the device was previously available online from retail sites including Amazon, Newegg and TigerDirect, the Ultrabook is currently listed as out of stock or discontinued. A report in TechnoBuffalo confirmed Asus had delayed shipment of the Taichi.
The Taichi is a combination of notebook and tablet with a double-sided full HD In-Plane Switching (IPS) display that switches between modes at a touch. Lid open, Taichi is a notebook with a full-size backlit keyboard. When the lid is closed, it transforms into a multi-touch tablet.
Both Taichi screens work independently and simultaneously, and the system includes an Intel Core i7 processor, SonicMaster audio co-developed with Bang & Olufsen ICEpower, dual HD cameras and array microphones.
The device runs a choice of Microsoft Windows 8 or Windows 8 Pro operating systems, offers 4GB of memory, a SATA III solid state drive (SSD) in 128GB or 256GB configurations, Bluetooth 4.0 connectivity, 802.11 a/b/g/n wireless connectivity with Intel Wireless Display (WIDI) support and up to five hours of battery life.
Mirror mode makes the Taichi capable of something Asus claims no other notebook or tablet can provide– two screens in one. With the lid open and Mirror mode enabled, the two back-to-back screens display the same image, which makes it possible to conduct software demos or enjoy a shared movie experience. A supplied Screen Share application lets a presenter see the script on one screen while the audience views slides on the other.
The Taichi also features a stylus for better precision with productivity and creative apps, a 5-megapixel autofocus camera with 1080p Full HD video recording and a second 720p HD video camera featuring a noise-suppressing array microphone for improved video chat in loud environments.
While the Taichi has been delayed, Asus recently released the Series BU400 Ultrabook, which features durability-enhancing capabilities, including carbon-reinforced construction and anti-shock hard drives to protect data from harm. It also offers optional Nvidia NVS 5200M business graphics, self-encrypting storage, Trusted Platform Module (TPM) technology, and Intel Anti-Theft technology.
An October report from IT analytics firm IHS suggests the near-term prospects for Ultrabooks– a higher-end type of notebook defined by Intel that use low-power Intel Core processors, solid-state drives, and unibody chassis—are not positive, despite an aggressive marketing push from Intel.
“Intel Corp. has not matched its ambitious goals for Ultrabooks with the marketing needed to propel the platforms as a desirable, affordable alternative to conventional notebooks and tablets,” IHS analyst for memory and storage Ryan Chien wrote in the report.