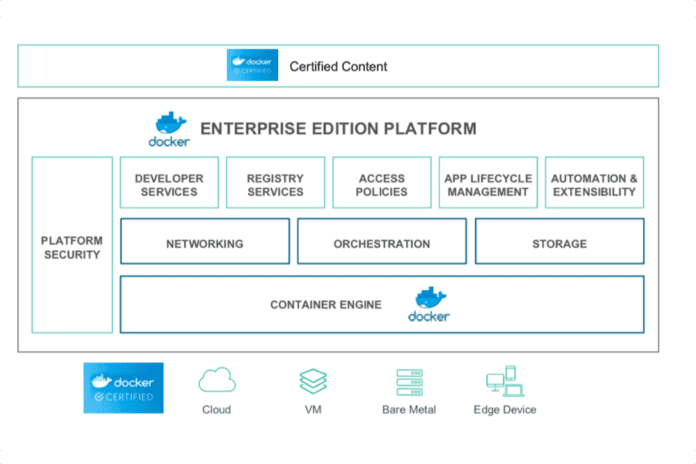 After months of development effort, Kubernetes is now fully supported in the stable release of the Docker Enterprise Edition.

Docker Inc. officially announced Docker EE 2.0 on April 17, adding features that have been in development in the Docker Community Edition (CE) as well as enhanced enterprise grade capabilities. Docker first announced its intention to support Kubernetes in October 2017. With Docker EE 2.0, Docker is providing a secured configuration of Kubernetes for container orchestration.

“Docker EE 2.0 brings the promise of choice,” Docker Chief Operating Officer Scott Johnston told eWEEK. “We have been investing heavily in security in the last few years, and you’ll see that in our Kubernetes integration as well.”

“Swarm sets up the nodes and the mutually authenticated TLS,” he said. “Once that’s set up, we deploy Kubernetes on top of that.”

Johnston emphasized that Docker is using a full Kubernetes stack taken from the upstream open-source project and is not a fork. He noted that Docker EE deploys Kubernetes on top of Swarm for improved management and security.

For developers, Docker EE 2.0 enables the same Docker Compose files used for application building to also work for Kubernetes, in addition to native Kubernetes YAML (Yet Another Markup Language) files.

“So if an organization wants to take advantage of Kubernetes, they can take an existing Docker Compose file and plug the application into the Kubernetes environment unchanged,” Johnston said.

With Docker EE’s new support for Kubernetes, Docker comes into broader competition with other Kubernetes platform vendors, including Red Hat’s OpenShift. Johnston noted that Docker differentiates from others in the Kubernetes marketplace in a number of ways, including choice. Docker EE 2 can run on a variety of Linux vendor platforms and is not tied to any specific distribution.

“Some vendors do require customers to use their specific Linux operating system, virtualization layer and certified images to be supported,” he said. “What we’re hearing from our customers is they want more flexibility because they have different infrastructure architecture types and operating systems they want to take advantage of.”

Docker Kubernetes for Windows is still in beta and is being actively developed.

The Kubernetes storage market is still at a relatively early stage, which is an area where Docker is looking to help push the market forward, Johnston noted.

Docker is also working on expanding its Modernize Traditional Applications (MTA) program that was first announced at the DockerCon 17 conference.

“On the traditional apps side, you’ve seen us come out with .net and Tomcat Java support already,” Johnston said. “Watch this space, because there is more than just Tomcat; there are other Java servers that have a lot of users.”