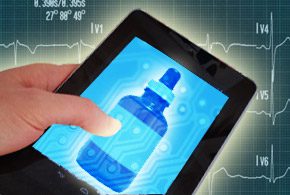 What if you could swallow a pill and it would transmit back critical biometric data via a skin patch from the dark recesses of your stomach? It sounds like science fiction, but the technology exists now. At the recent Mobile Health: The Power of Wearables, Sensors, and Apps to Transform Clinical Trials conference held at the New York Academy of Sciences and sponsored by Medidata, doctors, scientists and technologists convened to discuss their research, inventions and issues surrounding their ground-breaking efforts and the emerging market.

Seventeen years ago, there was a key group of scientists and technologists at Columbia University of which Glen de Vries, Medidata president and co-founder, was a part. According to de Vries, “The group believed that there was infrastructure in the world that could be used to make clinical trials better. We saw the future, living underutilized, in what was then the present. ‘It’s called the Internet. It’s there. Nobody’s using it.’ We knew we could connect all the doctors, nurses and life scientists in a more efficient way.” When naysayers grumbled that not everyone had an Internet connection, de Vries countered, “We know, but there’ll be fewer who don’t tomorrow, and fewer still the next day.”

Bernard Munos of FasterCures, and one of the conference organizers, told eWEEK that big change is coming because mobile health technologies enable a smarter form of medicine. “Medicine, as every other science, is driven by data,” he said. “At the moment, there’s a lot of data that medicine doesn’t have, so the quality of care suffers.” It’s well-known that diseases brew internally long before they manifest themselves and can be diagnosed and treated. Having access to a treasure trove of data may help physicians see what happened leading up to the diagnosis.

Large amounts of data from different types of devices—which include digestibles, injectables, implantables, or wearables like the Fitbit and new patches—will be available to users and their physicians as awareness, and therefore use, of their benefits grows.

Pam Baker, author of the book Data Divination: Big Data Strategies, said, “These devices are on all the time rendering data being gleaned 24/7. The data is more granular now so the challenge is understanding how to parse it to deliver useful diagnostic and preventative information.” The data provided by these devices is more accurate because it’s real time and doesn’t rely on a user writing it down on forms in the doctor’s office or in a diary like diabetics are asked to maintain.

Currently most, but not all, camps agree that data is owned by the user or patient. FasterCures’ Munos is one of those who doesn’t agree. “There are a few entities that believe that data should be owned by the collector, but I don’t agree,” he said. “This may change as patients become more privacy-oriented and well-informed.” If data can be collected, scrubbed and anonymized with the individual’s permission to show information that only pertains to gender, age and other non-identifying but useful information for a clinical trial, a great opportunity exists.

There are also regulatory and certification issues to overcome. While some of these devices are necessarily medically oriented such as an implantable pacemaker, others are fitness-oriented such as the bracelet-like Fitbit. To be Food and Drug Administration-certified, obtained data needs to be processed, or interpreted, on an FDA-certified device. This means that smartphones and Fitbits can send data but cannot process it for diagnostic or medical use. Just how these issues are resolved will to some extent determine how, and which way, the market grows.

“Developers will have an easier road if they build apps that monitor diseases that are easily captured by sensors and wearables,” advised Munos. “Try to pick a disease where you can connect small data with big data and create value for the user.” A good example would be to connect asthma, or allergy symptoms, with weather conditions like pollen count.

Apple’s Research Kit for iOS is the leading development platform for mobile apps, and several other companies including Google, Samsung, Qualcomm and Microsoft have development platforms in the pipeline. Out of the gate, Apple’s position has been that it is in the game for the hardware, that it doesn’t care about the data, that the data belongs to the user. It also offers the user a place in the cloud to store their data, saying it doesn’t want to even see it. This reassurance has put users at ease and has created user demand for the hardware.

Mobile Health Tech Has the Power to Transform Quality of Care

Christian Stammel, founder and CEO of WT Wearable Technologies, sees more barriers for developers where health care app development is concerned because few fitness devices are being medically certified, which he interprets as fewer opportunities for health care developers. He said the fitness market is totally open for developers because there is less FDA restriction and fewer regulatory hurdles.

Enterprise: Create Value for the Patient

Munos said that there is a tendency in the tech world for companies to rush to market early with a product and then pray that people buy it. Instead, he suggested doing thorough market research with actual patients to find out what they need and might like. Take, for example, multiple sclerosis: Physicians like to track microscopic lesions, but patients care about mobility. Track mobility.

Stammel’s take is similar to Munos’. He advised health care and fitness companies wanting to break into the market to start with the engineering component. “To the fitness companies, I say start with your engineering process so that later on your invention can obtain medical certification if you need it,” he recommended. “To medical companies, I recommend they try to prevent designing devices that look like they come from the ‘illness factor,’ like products for ill people. They need to design their products to be more stylish without sacrificing functionality, so users find value and will also want to wear them because they’re well-designed.”

First launched in 2009, WT Wearable Technologies Innovation World Cup is now a major competition in the field of wearable technologies. Contestants include developers, startups and researchers from all over the world. Entries are for accepted in the wearables, IMT and cloud areas. The competition categories include Sports & Fitness, Healthcare & Wellness, Gaming & Lifestyle, and Safety & Security. Special categories include Smart Clothing and Smart Jewelry.

Back to the Future

The impact of mobile health, wearable and sensor technology and apps on society will be huge. “There have been life-changing inventions like the personal computer, Internet and smartphone in the past. These technologies may be the next major life evolver,” noted Munos.

They could reduce insurance costs by as much as 80 percent.

“Let’s sit down with patients, find out what sort of data would be useful to them, and come up with something that will help them manage their health or disease,” Munos said. “If we do that, not only will they endorse the solution, they’ll help make it happen.”