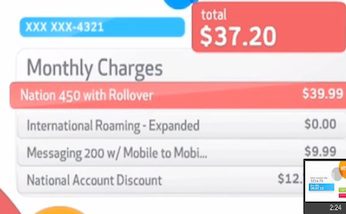 AT&T is hoping to simplify customers’ wireless lives with the introduction of video bills—personalized, automatically generated videos with animations and a voice narration of a wireless bill.

“This video bill is not a generic overview,” John Donovan, AT&T senior executive vice president, said in a Dec. 4 blog post, “but a line-by-line visual and audio tour of your individual charges, emailed directly to you and also available when you log into your myAT&T account online.”

AT&T is the first carrier to offer video bills, and Donovan is pretty sure that customers will love them. How does he know? Before initiating a nationwide rollout—that will happen early in 2013—AT&T tried it out on customers in the Mountain Time Zone.

More than 85 percent of those customers said they found the video bill helpful, and nearly 80 percent “open and watch the three-minute video bill to completion.”

AT&T may nonetheless have a bit of work to do, convincing folks of the videos’ usefulness, if the reader responses to a Gizmodo story are any indication. Comments ranged from earnest applause for AT&T’s online payment system to “looks like I picked the right time to jump ship for Verizon” to “I would rather cut down a rain forest full of trees for the paper than be subject to watching another video of a bill.”

Analyst Ken Hyers, with Technology Business Research, expects that all operators will eventually offer their own versions of video billing. And while video bills won’t be for everyone, those with more complicated plans might come to appreciate them.

“I don’t believe customers will use it each month, but when they do have questions about their bill, or are considering changing/upgrading their plans, it will be helpful,” Hyers told eWEEK. ” I think it will be especially popular for customers who consolidate their communications services with AT&T, including mobile plans, wire-line, cable, and in the future, home automation and security. As plans grow more complex, a simple tool to clarify and explain will become much more valuable.”

AT&T officials said the concept for the service came from its Foundry innovation center in Ra’anana, Israel. The idea was presented in a “fast pitch” presentation, and after receiving the green light, AT&T’s IT group was able to deliver video billing to U-verse customers within 12 months.

In early November, AT&T also announced a three-year plan to invest $14 billion in key infrastructure and new initiatives—such as connected cars and an all IP-based home security service.

“AT&T is probably the most aggressive about moving into areas adjacent to its core technology, as it did with U-verse TV, which leveraged its fiber broadband rollout, and as it is planning with home automation and security, which leverages its wireless network,” said Hyers. “In those situations, where the total service is much more complex than a bill for a single cell-phone, services like AT&T’s video bill explanation will prove useful.”

While less-patient East Coasters may devastate that nice “nearly 80 percent” statistic the Mountain Time people established, an AT&T spokesperson confirmed that there’s one template for the video.

“New Yorkers get the same video as everyone else,” he told eWEEK.