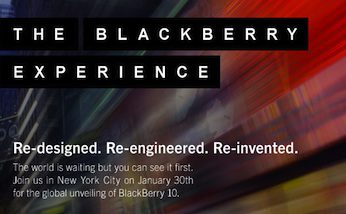 BlackBerry-maker Research In Motion (RIM) is counting down the days until the Jan. 30 launch of its long-awaited BlackBerry 10 platform. Building momentum for the release, RIM sent out email invites Dec. 17 to select members of the press, inviting them to an event in New York City that morning.

“Re-designed. Re-engineered. Re-invented,” says the invitation. “The world is waiting but you can see it first.”

What RIM reveals, and how it’s accepted, will in large part determine the company’s fate. In recent years RIM’s BlackBerry handsets, lacking the consumer appeal of the Apple iPhone and Android-running devices like the Samsung Galaxy S III, have left the once leading smartphone maker scrambling for even a single-digit share of the market. With time, RIM learned that its legacy as an ultra-secure platform wasn’t enough to sustain it, and it needs a device that can as easily work as play.

RIM has promised new smartphones along with its new platform, at least one with a dedicated QWERTY keypad and one with solely a touch-screen interface.

RIM CEO Thorsten Heins, during an August interview with eWEEK, said the world can expect better experiences on both.

“We’ve spent a lot of innovation on the full-touch virtual keypad,” said Heins. “That was huge. We want the typing experience on the [touch-based BlackBerry] to get at least as close as it can to a physical QWERTY.”

The QWERTY, too, will be improved. At BlackBerry World in May, Heins, with Vivek Bhardwaj, head of software at RIM, showed how the team had “improved responsiveness and reduced latency” so that users can type even faster and with greater accuracy. The phone, which learns, will “like a glove” become more tailored to a user with time, said Bhardwaj.

Bhardwaj also demonstrated how words formed over his fingers as he typed, making it easy to swipe them up toward to the display without taking his fingers off the keypad, as well as the ability for the phone to recognize and not flinch at the inclusion of words from various languages.

Among other promised improvements, Heins has said that RIM will rely on the expertise of partners for apps such as games and maps and that BlackBerry 10 will end the mentality of the home screen being a portal to content.

“When you work within an app and want to do something different? Back, new app. Need to do something else? Back, new app,” Heins told eWEEK, describing a frustration of common mobile architecture. “What BlackBerry 10 will do for you is stop this paradigm of ‘in-out,’ as we call it, and through multi-tasking, real-time capabilities allow you to flow across those applications.”

The same day that word of its party went out, RIM, again by invitation only, selected 120 customers to begin beta testing its BlackBerry Enterprise Service 10 and pre-production BlackBerry 10 smartphones. RIM said that these include customers from a variety of industries and that 64 are Fortune 500 companies.

“Customers will have first-hand experience with features such as BlackBerry Balance, the BlackBerry Hub, the ability to seamlessly flow between core applications, the dedicated enterprise app store and the BlackBerry 10 platform’s secure connectivity to behind the firewall applications and data through BlackBerry Enterprise Service 10,” RIM said in a Dec. 17 statement.

It’s been rumored that the company will also launch BlackBerry 10 with a marketing campaign that features celebrities, such as J.K. Rowling and Lady Gaga, and non-celebrities using the device for 24 hours and seeing what they can accomplish.