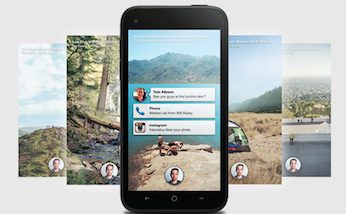 The HTC First is now just 99 cents on the AT&T network, when purchased with a new two-year contract.

The deep discount on a phone released less than a month ago—AT&T exclusively began selling it April 12 for $99.99 with a new service contract—suggests not great traction for the first phone to put Facebook front and center.

The First features Facebook Home, a mobile experience that puts Facebook Friends’ updates and messages on a user’s home screen.

“Home is a completely new experience for your phone. With Home available right out of the box, you’re getting the best quality experience for connecting your friends,” Facebook CEO Mark Zuckerberg said in an April 4 statement, introducing the phone.

Analysts were skeptical from the start that the First—which like all other new entries must fight an uphill battle against dominant players Samsung and Apple—would find a strong following.

“The fundamental question to me is, will users want to essentially spend all of their time in this one uber app? I’m not sure those that spend 90 percent of their time in Facebook will find it appealing,” Jack Gold, principal analyst with J. Gold Associates, said in a research note following the First’s introduction.

“What Facebook sees as Home, others might see as a jail—too much control and too many boundaries for them, especially if they are only occasional users of Facebook (which is the vast majority of people),” Gold said, adding that Facebook doesn’t give statistics about how many of its uses are occasional, versus frequent.

Sterne Agee analyst Shaw Wu suggested the interface could be a potential threat to Google and also questioned whether there’s a significant-enough market for such a social-focused device.

“This is ultimately a matter of whether users want a prominent view of their friends and feeds (and not so friends) at all times,” Wu wrote in a research note.

While unique, the interface “could be easily replicated,” he said.

Facebook, of course, would have welcomed a home run, though a strikeout was expected to have little impact. For HTC, the impact of a miss is greater.

HTC, sharing early results April 8, announced its lowest profits since it began reporting in 2004, after supplier issues drastically delayed the rollout of the One—the newest flagship phone that the company is banking on.

HTC encourages investors to look toward the second quarter.

“In February our teams set a new standard for smartphones, launching the HTC One,” CEO Peter Chou said in a May 8 statement announcing the quarter’s final results. “The reviews of fans and critics alike have been overwhelmingly positive and we look forward to delivering on the promise of this device.”

“In this case, I suspect the demand for the First is pretty low and AT&T is trying to clear out its inventory,” Gold told eWEEK May 9. “It’s not a question of newer phones coming in—that is always the case. I believe the market is confirming what I said at the announcement—this product has very limited appeal and will likely not survive as a FB-dominated device.”

He added, in an aside, “Maybe some energetic techies will find a way to remove the [Facebook software] and turn it into a just a general Android phone, in which case $0.99 is a bargain.”