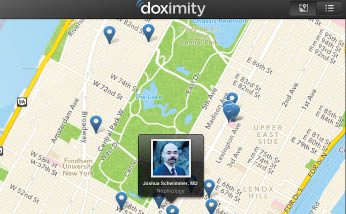 Doximity, an online network for doctors, has unveiled an iPad app to allow doctors to collaborate in a manner compliant with the Health Insurance Portability and Accountability Act (HIPAA) on a larger screen.

The company also offers an app for the iPhone and Android. The Retina screen of the iPad has a larger view than that of the iPhone so doctors can expand their search capabilities and make them more precise, Nate Gross, co-founder of Doximity, told eWEEK.

The app could allow a doctor to customize a search for, say, a nephrologist who attended medical school at Harvard and spoke a particular language fluently, Gross said.

In addition, Doximity offers HIPAA-compliant faxing, email and text-messaging so doctors can communicate with colleagues. A verification engine enables doctors to identify who they are messaging with, Gross noted.

Doximity is often described as a LinkedIn for doctors, Gross noted.

“The goal is to help doctors find and connect with one other a lot more efficiently than they do now,” he said. “So much of the time we just don’t see any appropriate communication, whether it’s in follow-up with a primary care provider or even within a health system.”

Viewing a full fax without scrolling is where the large size of the iPad comes in handy, according to Gross. In the Doximity mobile app, each doctor is assigned a fax number and receives faxes directly to the Apple tablet. Physicians can add signatures and notes to faxes and search a fax directory of 707,000 U.S. doctors and 60,000 pharmacies.

“Our secret sauce is the directory,” Gross said. “That allows us to be backward-compatible with the existing health care system.”

Despite faxes being often considered a technology of the past, the health care industry sends 15 billion faxes. “That’s not going anywhere anytime soon,” Gross said.

Apps such as Aetna’s iTriage also include directories of physicians on the iPad. Companies such as Biscom offer cloud voice over IP (VOIP) faxing that’s used in the health care industry.

In addition to its directory, the Doximity app enables doctors to access academic journals and comment on them using its DocNews social reader. They can search the U.S. National Institutes of Health’s PubMed search engine to access academic literature.

“DocNews pulls in the entirety of PubMed every day,” Gross said. “It’s built into Doximity. Our algorithms sort through PubMed and deliver that news to you based on what you want.”

Although the health care industry has struggling to design clinical applications for the iPad, directories and reference tools like Healthline that allow doctors to access medical educational materials have been a big part of doctors’ use of the tablet, according to Spyglass Consulting.