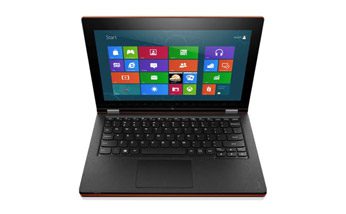 Lenovo arrived at the 2013 Consumer Electronics Show in Las Vegas with a product load befitting the industry’s new king of the PC mountain. During the third quarter of 2012, Lenovo became the world’s top-selling PC maker, as its market share squeaked past that of long-time market leader Hewlett-Packard by a fraction of a percent, according to Gartner.

On Jan. 6 Lenovo showed off a Windows 8 lineup that included new ThinkPads and IdeaPads, as well as a 27-inch all-in-one IdeaCentre, an Erazer desktop for extreme gaming and the IdeaCentre Horizon Table PC—the company’s first “interpersonal PC.” It can lie flat, table style, enabling several users to interact with it at once.

On Jan. 7, Lenovo officials kept the news coming, with the introduction of new IdeaPad Yoga and ThinkPad Helix convertibles. And still more is likely to emerge before the show’s conclusion. Until then, here’s a summary of Lenovo’s introductions at the show:

Lenovo calls the Horizon a “multi-user, multi-touch, multi-mode device for the home that allows users to turn their personal computing experience into a shared computing experience.” It’s a neat way to play new types of games—with the introduction of Horizon comes the Lenovo App Shop, a dedicated app store with currently more than 5,000 multi-user entertainment apps—but it can also be set upright to behave as a 27-inch high-performance desktop.

The Horizon runs Windows 8 Pro, a 3rd Generation Intel Core i7 processor and up to Nvidia GeForce GT 620M 1GB graphics with DirectX 11. It will arrive in the early summer with pricing starting at $1,699.

The premium convertible device in Lenovo’s ThinkPad line, the Helix can be used in four modes and features what Lenovo is pitching as a “rip and flip” design.

Its first order of business is as an Ultrabook—a laptop with an 11.6-inch, full high-definition, 10-point multi-touch display, Intel vPro technology, 10 hours of battery life, a clickpad with 20 percent more space and a weight of 3.68 pounds.

Give the display a 180-degree turn and it’s in Stand mode, ideal for presentations or movie watching. From there, fold the display down—mode three—and the Helix becomes a convertible tablet with all its ports intact. Finally, the display can be separated from the base, for a truer tablet experience and used with the stylus hiding in a hole in its top right corner.

The Helix runs Windows 8 or Windows 8 Pro, up to a 3rd Gen Intel Core i7 processor plus Intel Integrated Graphics, has near-field communication (NFC) technology on board, along with Dolby Home Theater v4, dual high-definition 1080p Webcams and 4G Long Term Evolution (LTE) connectivity. It will arrive in late February, starting at $1,499.

Lenovo’s latest Yoga IdeaPad is another literally flexible option. It features a 360-degree hinge that makes it usable as a laptop, as a convertible tablet (just fold it backward, head to toe, as it were) and in every incarnation in between.

It features an 11.6-inch HD (1366 by 768 pixels) display, runs Windows 8 and up to a 3rd Gen Core i5 processor in the United States, though worldwide up to an i7 will be available. Other features include Intel HD 4000 graphics, up to an 8GB of memory and 256GB of solid-state-drive (SSD) storage, Dolby Home Theatre v4 technology, an HD Webcam, six hours of battery life and a weight of 3.08 pounds.

It will arrive in June with a starting price of $799.

Though the newest 27-inch Apple iMac measures 5mm at its thinnest edge, Lenovo claims that overall, the A730 is the “world’s slimmest 27-inch multi-touch all-in-one.” It will arrive in June with a starting price of $1,499.

Hardcore gamers—or anyone running energy-guzzling multimedia applications—should take note of the X700, and not just because the desktop looks Transformers-inspired. The X700, which runs Windows 8 Pro and up to an Intel Core i7 Extreme processor, features Lenovo’s Onekey Overclocking feature, which enables users to “overclock” the system with the push of a button. Lenovo explained: “Many similar gaming PCs require users to adjust the setting in the BIOS. Because the Erazer X700 leverages AMD Eyefinity technology, the user can connect up to six monitors to enjoy a panoramic screen display and add up to 4TB of storage without tools while the PC is still running.”

There are dual graphics support options, Option 7.1 channel surround sound support with Dolby Advanced Audio, a 9in1 card reader, an integrated DVD reader/writer and a Blu-ray disk drive. It’ll arrive in June and start at $1,499.

Lenovo also introduced Mobile Touch Screen Companions—mobile monitors for those wanting extra screen real estate and touch functionality. An LT1423p will be available in wired or wireless additions, with a 13.3-inch display, and start at $449 when it arrives during the second quarter.

Introducing the Windows 8 convertibles Monday afternoon, Hortensius added, “Our unmatched family of convertibles gives consumers, students, business professionals and everyone in between the opportunity to choose the convertible that’s right for them.”