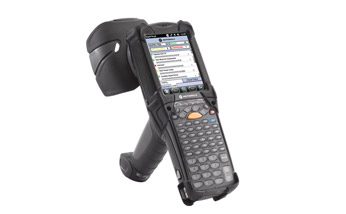 The company introduced the device on Nov. 7. The handheld is designed for the manufacturing, warehouse, pharmaceutical, transportation and logistics industries.

Motorola Solutions is the division of Motorola that develops communications products for enterprises and government agencies.

An update to the company’s MC9000 Series line, the MC9190-Z features a long-range linear antenna that enables users to capture data more accurately, according to the company.

The device will allow workers in a warehouse or distribution center to get a more accurate count of inventory, which will reduce out-of-stock issues and excess inventory carrying costs, Motorola reported.

In health care, the MC9190-Z can be used to help care providers keep track of patients by scanning their bracelets. The device can also help nurses and hospital staff keep track of medication or supplies in a cabinet, Chris Warner, senior product marketing manager at Motorola, told eWEEK.

Using the MC9190-Z, users can read tags in a 30- to 40-foot range. Caregivers could identify elderly patients who may be suffering from dementia and disoriented but able to walk around a care facility, Warner noted.

In addition to patients, the device could also track RFID-tagged carts and equipment moving through a doorway, he said.

The 806MHz Marvell PXA320 processor, an improvement over the CPU in the Motorola MC9090-Z, will offer faster RFID readings. In addition, the MC9190-Z includes 256MB of memory, which is higher than the MC9090-Z’s 64MB of memory.

It operates on Windows Mobile 6.5. With its ability to incorporate both RFID and bar-coding, the device could help companies lower their total cost of ownership, Motorola reported.

The RFID tool is used in work environments that require reading tags in bulk quickly, especially where tracking, counting and locating inventory is critical to a business, said Warner. Movement of goods and assets is extremely critical in an enterprise, Warner noted.

An improved ergonomic feel of the MC9190-Z’s handle also aids the quick counting of inventory he said.

Rugged features in the MC9190-Z include corner bumpers, which allow the device to withstand 6-foot drops to concrete and 2,000 1-meter tumbles. An Ingress Protection (IP)-64 rating means the device can survive bumps and exposure to dust and splashes of water.

A new direct parts marking, data-capture feature on the MC9190-Z can help with data capture in manufacturing and aviation, according to Warner.