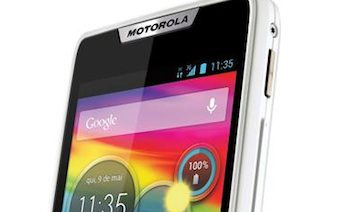 Motorola plans to introduce a new product line during the next few months into October, and has big hopes for a new hero phone, the Moto X, Motorola CEO Dennis Woodside said during a May 29 interview at the D: All Things D event.

Since being purchased by Google in 2012, Motorola has yet to make a major comeback—despite talk of “the new Motorola” back at the Sept. 5, 2012 introduction of three Droid Razr phones.

That day, Woodside also borrowed from a ’70s love song, telling the crowd, “We’ve only just begun.” At the D event—where he was interviewed alongside Regina Dugan, who was snagged from the Defense Advanced Research Projects Agency (DARPA) to head Motorola’s advanced R&D work—Woodside’s comments suggested that is indeed the case.

The Moto X, which Woodside said he had in his pocket but couldn’t show off, will rely heavily on sensors—bringing to mind the Samsung Galaxy S III and 4.

“The new phone will know when you take it out of your pocket, for example,” he said, according to report from All Things D’s Ina Fried. “It anticipates my needs.”

Woodside said he was given a directive by Google head Larry Page to take Motorola back to the roots of innovation.

One area that could use some innovation is authentication, said Dugan. “It is so irritating that only about half of people protect their devices.”

Motorola has a few ideas in the works, she said, including using electronic tattoos—she was wearing one, from MC10—for authentication.

(At the BlackBerry Live show in Orlando earlier this month, a QNX software product manager showed removable tattoos—which look not unlike the kind marketed to small kids—being used as part of a tube- and monitor-free health care solution to take more effective patient heart readings.)

She added that many 20-year-olds may not want to wear a watch—likely a dig at Apple CEO Tim Cook, who said the day before that people are probably more inclined to wear a watch than glasses, meaning Google Glass—”but they’ll wear a tattoo, if only to piss off their parents.”

Another far-from-traditional authentication solution is a pill containing a chip and a switch.

“It’s powered by a battery, charged by the acids in your stomach creating an electronic switch,” said Dugan. “Your entire body becomes your authentication token.”

Woodside said that no one should expect the pills to begin shipping soon, but that they’re a “sign of the new boldness inside Motorola.”

The company used to take more risks, he added. “If we can bring back that audaciousness and that confidence, good things will happen.”

Yet another bold move is Motorola’s plan to build the Moto X in Texas, in a factory outside Fort Worth that once made Nokia phones. This would make it the company’s first smartphone—if not the only smartphone in the industry—built in the United States. Woodside clarified that the processors will be from Taiwan and the OLED screens from Korea, “but 70 percent of assembly will occur in Texas.”

Motorola finished 2012 with a 1.9 percent share of the global mobile phone market, according to Gartner. When asked how confident he is that Motorola’s next batch of phones will “move the needle,” Woodside said “pretty confident,” pointing out that in 2010, current market leader Samsung was selling the same number of devices that Motorola is shipping today.

The products Motorola plans to ship throughout the fall, Woodside added, “are unlike other things out there.”

Editor’s Note: This story has been corrected to reflect that the new factory is outside of Fort Worth, not Austin.