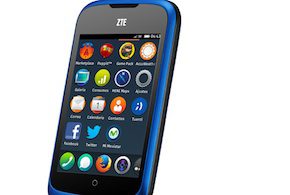 Mozilla has been promising smartphones running on its Web-based Firefox OS, and on July 1 it showed off the Alcatel One Touch Fire and the ZTE Open.

The devices are designed for first-time smartphone owners. The Alcatel is a bright, Firefox orange and the ZTE is a highlighter blue.

“I was in Brazil the other week, and it’s different there,” said Mozilla CTO Brendan Eich, leading a press event in San Francisco and clearly giddy to have reached this milestone.

Answering a question about what would constitute success for the OS, Eich continued, “The iPhone is prohibitively expensive there. We are not aiming high, to crash into Fortress Apple. We are trying to convert feature phone owners who are having a poor experience. … If we can convert those users, that would be excellent.”

In a demo, the Firefox OS looked not so unlike an Android experience, with a home page full of app icons. Facebook and Twitter come preloaded, though, thanks to agreements between the companies, and contacts load to the phone from a user’s Facebook account. A user can Facebook-message friends directly from her contacts, as well as see information like a friend’s birthday and latest status update.

The OS also includes what Mozilla calls an “adaptive app search,” which lets a user search based on intentions, rather than proper nouns. If you put in sushi, for example, you don’t just get apps with the word “sushi” in them but information for local sushi restaurants and maybe information on how to make sushi. A search for a band would turn up not just albums but information on buying concert tickets.

“It’s a smartphone that really adapts to your needs,” said Chris Lee, director of Firefox at Mozilla.

Nokia’s Here Maps are included, and so is a Firefox Marketplace, for apps in categories including games, news, music and productivity. Eich said the beauty of the OS is that it’s not asking developers to start from scratch.

Telefonica CEO Luis Miguel Gilperez added to this idea in a statement.

“We believe that smartphones need to be more open and that the Web is the platform for making this possible,” said Gilperez. “Consumers should not be locked to any one system but have the choice to consume the content they want and the flexibility to be able to take it with them when they change devices. This first open Web device marks a significant milestone in making this possible.”

Telefonica will launch the phone in Spain, bring it to Colombia and Venezuela in the coming weeks, and have it in all the countries it covers by the end of next year.

Deutsche Telekom plans to launch the One Touch Fire in Poland.

“The launch of the first Firefox smartphones in Europe is an important step on the way to more innovation and to more competition between the different ecosystems,” Claudia Nemat, a DT board member, said in a statement. “We rely on open platforms because we want to create freedom of choice on behalf of our customers.”

Hardware makers LG and Huawei will soon also offer Firefox OS-running smartphones, and 18 carrier partners around the world, including Sprint in the United States, have announced their commitment.

When will the Firefox OS come to the United States? Eich said for now consumers in the U.S. should check out Geeksphone, but that eventually Firefox phones will be in the U.S. through “various channels.”

He also said that a tablet is imminent.

“A tablet is the obvious next step,” said Eich. “We’re going to get to tablets ASAP.”