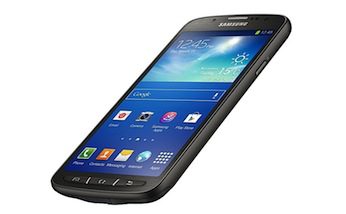 Hot on the heels of Sony’s latest announcement of its Xperia family of smartphones, rival handset manufacturer Samsung announced the Galaxy S 4 Active, with a fully sealed design that keeps dust particles out and protects against water damage for up to 30 minutes of submergence at a depth of 3 feet.

The S 4 Active has qualified protection from dust and water with a level of IP67. (IP stands for International Protection against the ingress of solid foreign objects and the harmful ingress of water, with the highest level being IP68.) The smartphone is also equipped with a water-resistant earphone jack and Glove Touch, which allows the touch-screen to be operated while wearing gloves.

“The Galaxy S 4 Active is the newest addition to the Galaxy series and is purposefully designed for active users who love the outdoors,” JK Shin, CEO and president of the IT and mobile communications division at Samsung, said in a statement. “Samsung has taken the innovative features of the Galaxy S 4 and added breakthrough protective design elements to create a device that thrives in an active environment and is built for a lifestyle of travel and exploration.”

Other features include a 1.9GHZ quad-core processor and 2,600mAh battery, 5-inch full-high-definition thin-film transistor (TFT) LCD screen and an 8-megapixel rear camera with Aqua Mode, which can be deployed to increase visual quality and clarity for enhanced underwater images and video. The S 4 Active will be available beginning this summer in the United States and Europe. It will be offered in three different, creatively named color options: Urban Grey, Dive Blue and Orange Flare.

In addition, the volume key located on the side of the device can be used as a camera key, allowing users to quickly open the camera application to capture photo and video. The camera also transforms into a LED flashlight to assist in low-light and nighttime activities with one long press of the volume key.

With the Story Album feature, photos taken with the S 4 Active are collected and sorted according to a user’s timeline, geo-tagging information or a specific event to create an organized photo album. To help facilitate sharing, users can also use the Group Play function to access music, photos, documents and games together and across various devices including the S 4, S 4 mini, Mega 6.3 and Mega 5.8.

The camera interface is designed to make capturing and sharing meaningful moments more engaging with multiple shooting modes, including Drama Shot, which allows users to see all the action in one continuous time-lapse, and Sound & Shot, which stores sound and voice together with the image in an immersive visual/audio format.

Outside the numerous camera features, the S 4 Active offers Smart Pause, which lets users control the screen using optical cues. While watching a video, the video pauses when users look away and starts up again when returning to view, saving battery life. Air Gesture lets users change the music track, scroll up and down on a Web page, or accept a call with the wave of the hand, and ChatOn, which connects and facilitates group chats, media sharing and interacting using pictures, hand drawings or figures across mobile devices.

For outdoor (or indoor) fitness nuts, the S 4 Active also features S Health, which helps users keep track of their personal health statistics. When paired with the S Health Accessory, users can monitor their heart rate, weight, sleep pattern and other personal measurements.