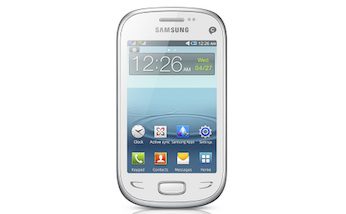 “Rex devices are designed to seamlessly prioritize and consolidate essential mobile functions that matter most to customers across diverse markets,” Shin said in a Feb. 14 statement. “The result is an extraordinary end-to-end mobile experience with the best value for money.”

With its new feature phone, Samsung is also continuing the nature-themed messages it began putting out with its Galaxy S III smartphone, calling it “designed for humans, inspired by nature.” The brushed-metal Rex phones, said Samsung, feature “organic nature-inspired” designs and “delicate back covers” with a “modern, sophisticated look.”

Arguably more compellingly, they also support two always-on SIM cards. This allows a user to keep work and personal calls separate, though still receive calls on one line while speaking on the other. The Rex phones support a maximum of five SIM cards that a user—or users, as is sometimes the case in developing markets—can switch between without rebooting the phone.

The Rex phones also run the Opera Mini browser—a speedy alternative to standard Web browsers that reformats content for smaller screens. As of this month, Opera Mini is said to have approximately 300 million active users. Thanks to the browser, Samsung says the Rex phones offer guaranteed fast Web browsing and app support, as well as “seamless communication through social networking and messaging services, including the cross-platform ChatOn.

The Rex 80 has a 3-inch QVGA TFT LCD, a 3.2-megapixel camera, ChatOn and TouchWiz Lite and the same connectivity and ports.

The display size drops again on the Rex 70, to a 3-inch QVGA TFT LCD, and the camera drops to 2 megapixels. The full TouchWiz is onboard, though, along with ChatOn, the same connectivity and slots as above, and more.

Samsung has had tremendous success with its Android-running line of Galaxy devices. During the fourth quarter of 2012, Samsung shipped 63 million smartphones, for a 29 percent share of the market, and Android was on 70 percent of the devices that shipped.

Still, looking to diversify, and likely put some space between itself and Google, Samsung has said that this year it will also introduce phones running Tizen, the Intel-backed, Linux-based operating system with roots in Nokia’s MeeGo OS. In January, according to Bloomberg, Samsung confirmed that it plans to “release new, competitive Tizen devices within this year and will keep expanding the lineup depending on market conditions.”