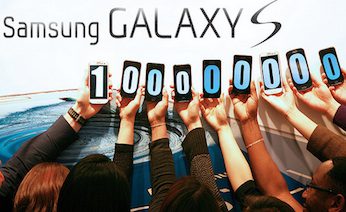 Samsung has risen to the top of the global smartphone market on the success of its Android-running Galaxy device line. Just how successful has it been? The device manufacturer shared in a January Flickr photo that sales of its Galaxy devices have passed the 100 million-units mark.

Samsung launched the Galaxy line in May 2010.

The “driving force” behind the line’s success, said Samsung officials, has been the Galaxy S II smartphone, which reached sales of 40 million units in 20 months. Its fastest seller, however, was the smartphone that followed.

“Galaxy S III is selling at [a] much faster rate of 30 million in 5 months and 40 million in 7 months, after becoming a million seller in only 50 days after its release last May,” according to the photo caption on the Tomorrow site. “Currently, its average daily sales are 190,000 units.”

During the third quarter of 2012, Samsung sold 98 million mobile phones and 55 million smartphones, according to Gartner, which credited the variety of price points in its Galaxy lineup. Samsung’s strong sales, the firm pointed out, “further widened the gap with Apple in the smartphone market.”

Samsung officials, celebrating the success of the Galaxy S III, told the harrowing tale of the phone’s unusual ceramic-coated Pebble Blue back cover, in a Jan. 15 blog post. Two weeks before the device’s May 29, 2012, introduction, it was decided that the design was inconsistent with the company’s proposed nature-inspired design, and production was halted, “which threw the entire chain into panic.”

What came next included perfecting a prototype, rushing it to the airport to gain the approval of executives flying to a U.S. business meeting, madly searching for a production facility and coordinating the largest-ever Samsung production team—more than 180 staff across tool development, molds, color material and finish (CMF), injection and other production areas—who had to work closely with suppliers.

“[Coordinating] with 180 other people was like a scene out of a battlefield,” said Suyeon June, senior vice president of the Korea Manufacturing Team. “Since even one missing item of supply material could affect the entire production line, everyone had to move forward as one.”

Eventually, the Pebble Blue cover entered production at a plant where orders normally would have numbered in the hundreds of thousands, but in the case of the Galaxy S III, Samsung needed millions. Production line workers familiarized themselves with the device “in record-breaking time” wrote Samsung officials, and ultimately met the production goal on time.

“I had been asking myself: … with so many of our current customers knowing nothing about the sample phone we’d produced, why was it such an imperative to change the battery cover?” said Jongkyun Shin, Samsung’s president of IT and Mobile Communication. “In the end, it came down to the very spirit of Samsung Electronics—bringing ourselves to realize our design ideal—no matter what the effort of cost—to provide our customers with something they would have never imagined or expected.”