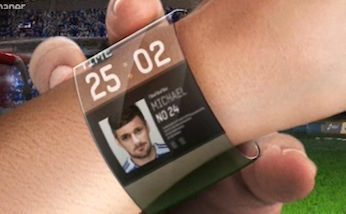 Samsung Display will show off a 5.5-inch flexible display at the upcoming Consumer Electronics Show (CES) in January. The display, likely to wind up in smartphones some day, features a high-definition resolution of 1280 by 720 pixels.

The flexible displays offer designers freedom, Samsung Display officials told CNET, according to a Dec. 19 report. While the ability to roll up completely is likely in the future, the report added, the technology is not there yet.

(Who needs it to roll up? If it’s thin enough and bendy enough to fit like a cuff around the wrist, we can stop talking about whether a display is too large to fit in a pocket.)

Flexible technologies have been in the works for some time and no doubt have a future on carriers’ shelves—if not also on our person. In 2010, Nokia filed a patent with the U.S. Patent and Trademark Office that described a flexible interface that could be folded end-to-end in a shape like a soup can, into more of a C-shaped cuff or bent in a classic tent shape.

Nokia officials explained that the forms a device takes would also convey instructions to the device.

“A user can thus answer an incoming call simply by rolling the Phone 700 or bending it into a position where it rests in a hand,” stated the patent. “This is an action that is highly intuitive to use.”

Nokia officials added that the technology was unlike liquid crystal displays, which can be rotated but not deformed, and different from other ideas of the day.

“We propose methods for interacting with flexible displays that rely on deformations of the surface structure of the display itself,” they wrote.

Nokia has yet to do anything with the technology, or at least anything that it has shared publicly, but ahead of the iPhone 5 launch, it was rumored that Apple was pursuing flexible displays.

In May, The Korea Times reported that Samsung had received a large order of flexible organic LEDs (OLEDs). The order was not intended for the iPhone 5, clarified AppleInsider, citing the Korean paper, but for a possible future device called the “iPhone Yoga.”

Samsung created Samsung Display in July through the combination of Samsung Mobile Display and S-LCD Corp. At the time of its announced creation, the company had 39,000 employees and seven production facilities worldwide.

“Samsung Display is destined to attain virtually unlimited growth, through continuous efforts to combine our proven know-how in the display field with an overwhelming creative spirit,” Oh-hyun Kwon, CEO of Samsung Display, said in a July 2 statement.

“Our combined strengths,” he continued, “will guide Samsung’s display business through the next decade and longer, in turning the many synergistic benefits of the company into far-reaching, tangible results.”

The statement added that the company “strives to advance the future” with technologies featuring “ultra-thin, energy efficient, flexible, foldable and transparent displays.”