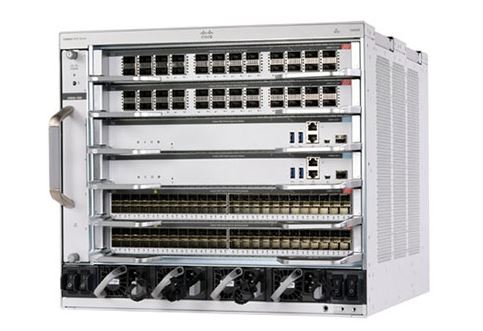 In all of networking there is no product more iconic than Cisco’s Catalyst 6000 series of Ethernet switches. The Cat6K, as it’s more commonly known, is the Starship Enterprise of the networking industry in that if you work in the network industry, you’re familiar with it. Prior to being an industry analyst, I worked in corporate IT and was at a value added reseller for a while and I have personally deployed dozens of Cat6Ks and can attest to the rock solid and flexible nature of the product.

The calling card of the Cat6K has been flexibility, because the product was much more than a switch. Cisco made a variety of line cards for it, including application delivery controllers, network management modules, security tools, routing engines and more.

The original Cat6K was introduced in 1999, and like Kirk’s Constitution Class Enterprise, the product has gone through many upgrades and had many flavors with the Catalyst 6500 being the most widely deployed. However, in the “Star Trek” television and movie series, the role of the Enterprise changed, and the Constitution Class gave way to the Galaxy Class Enterprise, captained by Jean Luc Picard. Similarly, the Cat6K has run its course, and Cisco recognized that it’s time to retire the product and come out with a newer version that’s in line with digital trends.

Earlier this month, Cisco announced its new WiFi 6 products. A secondary part of the news was the release of the new Catalyst 9600 campus core switches (see image at top), which will assume the role as the flagship of Cisco’s revamped Catalyst line. The Cat9600 completes the refresh of the networking products for Cisco that now includes the following:

Catalyst 9600 is Loaded with Features

All the new Cats were designed for an era where the assumption is that everything is connected with the 9600 being the core of the network. Product details are as follows:

Custom Silicon is Still a Differentiator for Cisco

The above are the most notable features, but there is a wide range of other capabilities. The use of the UADP ASIC is noteworthy, because custom silicon has long been a differentiator for Cisco. Most network vendors use only merchant silicon, whereas Cisco uses a combination of off-the-shelf and custom. The home-grown chip is what has allowed Cisco to get many features out to market before the competition and maintain its dominant share.

As an example, Cisco had about a two-year lead on the field with its own proprietary version of Power over Ethernet, while the rest of the industry was waiting for the standard to be ratified and then ported to merchant silicon. Many competitors claim Cisco does that to lock customers in, but Cisco does support the standard when available. However, Cisco’s version of many features provider capabilities that are above and beyond the standard, so customers tend to stick with the Cisco version.

The evolution from Cat6K to the Cat9600 is extremely important for Cisco, because the current install base of 6Ks is massive. Getting customers to use the latest and greatest Cisco technology such as IBN, DNA Center and unified wired and wireless is dependent on upgrading the end-to-end network.

Customers need to understand the benefits of the Cat9600 that go beyond speed, because the new switch is loaded with addition security and management capabilities. The Cat6Ks have been extremely reliable, but they aren’t modernized.

A good analogy is that someone could have a car built 20 years ago that drives just fine. However, the car will lack many of the modern safety features, such as automatic braking and lane-change correction. Both cars will get you from point A to point B, but one will de-risk the ride. Similarly, Cisco’s new network capabilities will automate operations and provide a higher level of protection.

Of all the products Cisco has ever released, none has stood the test of time like the Cat6K. The product line is 20 years old, and Cisco has squeezed as much life as it can out of it. As a former network engineer, I’ll give Cisco a tip of the hat for a job well done. It’s time to welcome the Cat9600 to the industry. The Cat6K set a high bar, so we’ll see if the Cat9600 is still kicking around 20 years from now.