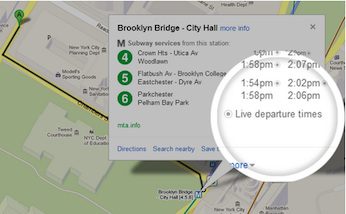 Straphangers in the nation’s capital, the Big Apple, and Salt Lake City could be facing a less stressful, more informed daily commute, thanks to Google Maps Transit. The service, which started March 27, allows user to view live departure times for seven lines on the New York City subway system, as well as for buses and trams in the greater Salt Lake City area.

Riders on the nation’s second-busiest subway, Metrorail in Washington, D.C., can now see live service alerts, including unplanned delays and scheduled track work, straight from Metro’s Control Center on Google Maps. Riders can choose another suggested route or change their departure time based on the alerts given.

For example, Manhattan subway riders clicking on the “N,Q,R” icon at the Times Square location on Google Maps will launch a pop-up window showing the upcoming departure times for all three lines. Clicking on the “More Info” link opens up a full Web page of information on departure times and photos of the immediate area.

“With transit information in Google Maps, you get pick-up locations, departure times, estimated travel time and even fare amounts for 800 cities across more than 25 countries around the world—that’s information for 100 million miles of daily public transit trips at your fingertips,” Soufi Esmaeilzadeh, Google Maps partnership developer, wrote on the Google Maps blog. “With these updates—part of the millions of live transit schedule updates we process every day—you get instant access to the latest information right on Google Maps.”

The latest announcement is evidence that Google’s long-in-the-works attempt to help urban commuters is paying off, albeit slowly. In August 2012, Google announced a feature for its Maps application that shows planned service alerts for the city’s subways, which serve more than 1 billion riders each year. The app was designed to give subway riders information on trains that may be skipping stops, have been rerouted on another line or aren’t running at all due to scheduled maintenance.

Users could click on any of the 468 New York City subway stations labeled on Google Maps, and they will then be provided with information regarding any planned service changes that would affect that station, as well as other relevant alerts that will be included in the transit directions pointing riders in the right direction. To adjust the travel around the alerts seen, users would simply choose another suggested route or change the departure time.

The company began its New York City project way back in 2008, when it unveiled comprehensive transit info for the entire New York metro region, encompassing subway, commuter rail, bus and ferry services from the Metropolitan Transportation Authority (MTA), the Port Authority of New York and New Jersey, New Jersey Transit and the City of New York. The release was the latest addition to Google’s sprawling transit mapping and information project, which covers more than 485 cities worldwide.