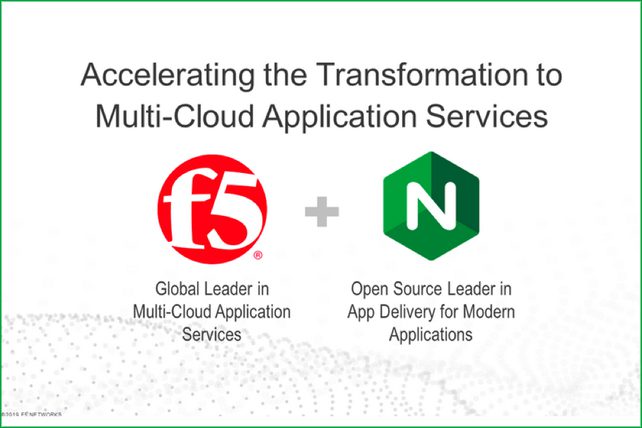 Application delivery controller market leader F5 Networks last week announced its intention to acquire privately held NGINX for $670 million in an all-cash transition. eWEEK Senior Editor Sean Michael Kerner covered the news, so I won’t rehash what he discussed, but I will focus on how this can help companies bridge the widening gap between traditional IT operations–such as NetOps and modern IT–more commonly known as DevOps.

We are smack in the middle of the digital transformation era, and that’s created a need for businesses to move with speed. The problem is that traditional IT operates too slow to meet the constantly changing needs of a digital business. One way to fix this would be to restructure IT to be more agile, but that’s akin to turning an aircraft carrier around. The fast path that many companies have taken is to create a parallel IT group focused on speed and innovation.

Agile IT, DevOps or whatever other name it goes by is the team whose mission it is to think cloud native and continuous innovation, which is very much at odds with traditional IT.

In no way do I want to diminish the role of traditional IT. This group is responsible for the big systems of record and all the mainstream applications that make businesses hum. There’s rightfully more conservatism in this group, because the risk of an outage or a failure is much higher, or even business-crippling. Gartner refers to these parallel IT teams as bimodal IT, with each one having its own processes, tools and development methodology.

This structure may make sense for now, but it’s inherently unscalable. The majority of businesses will eventually evolve to hybrid, multi-cloud environments that will push these groups together. Parallel or bimodal IT creates inconsistent processes, different vendors and mismatched application services that can created performance, scale, reliability or security problems.

Many vendors have noticed this and have tried to bridge the growing bimodal divide, including both NGINX and F5. You can find lots of F5 stuff on Github and other places where agile people go. Similarly, NGINX has had an enterprise push on for the past year or so but it’s been slow going for both. This has nothing to do with product, both companies are best in class in what they do but IT people, like everyone else, are human and make decisions based on who they know.  I’ve talked to many traditional IT people that think open source initiatives, like NGINX are risky and don’t have the same support as something like an F5. Conversely, I’ve spoken to agile developers that look at vendors like F5 as stodgy and too traditional to use and don’t offer the required flexibility.

This is where the combined company can have an impact. F5-NGINX now owns the end-to-end application experience from the app server to the data center. In the diagram (left), one can see that applications, even modernized ones, don’t exist in a silo and depend on the underlying infrastructure to make them perform optimally, highlighting the need for the traditional and the modern to work together.

Together, F5 and NGINX can enable hybrid, multi-cloud application services across all environments, provide the ease of use and agility required by developers and the scale and reliability that traditional network operations needs.

The open source element is interesting, because most industry people don’t ever equate traditional vendors with open source. F5 has been active with many open-source communities and will be able to accelerate that with the massive NGINX community. The risk would be that F5 tries too hard to monetize that community and pushes them away; however, in a discussion with the company, the post-acquisition news left me comfortable that it understands the specific nuances of the open-source audience.

One proof point of this is as simple as leaving the brand and management team in place. Current NGINX CEO, Gus Robertson and founders Igor Sysoev and Maxim Konovalov, are joining F5 to continue to lead NGINX. This will create a smooth transition to NGINX and F5 customers.

The acquisition of NGINX is a huge bet and the first acquisition for Francois Locoh-Donou as CEO of F5 Networks. I do believe it’s a good move, because the combined F5-NGINX customer base will benefit from the agility and flexibility enabled by modern technologies without having to sacrifice on reliability, security and manageability.