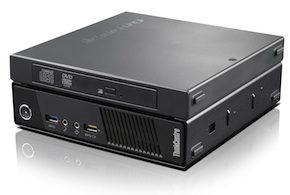 A new ThinkCentre M93p is “just the width of a golf ball,” according to Lenovo, a new Think Centre M93z all-in-one is “among the most powerful and energy efficient in the commercial space,” and ThinkCentre M83 and E93 desktops feature the power of 4th generation Intel Core processors.

“While the world believed that desktop PCs would become extinct, Lenovo believed in the desktop’s evolution,” Victor Rios, vice president and general manager of Think desktop, workstation and visuals, said in a July 9 statement. “This is how the original Tiny came into being.”

The new Tiny, he added, “takes this new evolution to the next level.” Or, as the Lenovo marketing folks put it, “Tiny is the new big.”

The ThinkCentre M93p features up to the latest 4th generation Intel Core i7 processors with Intel vPro, offers a 64GB solid-state drive and an optional solid state hybrid drive (SSHD).

It includes Lenovo’s Smart Power On feature, which lets users power the desktop from a wired or wireless desktop, and an Always On USB port with RapidCharge, for quickly charging connected devices, even when the M93p is sleeping.

It can be wall mounted, is also available in a Small Form Factor Pro version and is said to be 50 percent smaller than the size of a mini tower.

It’s also a rather green machine, including 65 percent post-consumer components and the option of brightness controls to improve energy efficiency.

Lenovo nearly tied long-time global PC leader Hewlett-Packard for sales during the first quarter of 2013, shipping 11.66 million units to HP’s 11.68, according to Gartner. However, Lenovo posted the only positive year-on-year growth of any top-five company—0.1 percent, versus HP’s minus 24 percent—suggesting that come the second quarter, the results may find Lenovo the leader of the pack.

Second quarter 2013 PC shipment results should be announced in a matter of days.