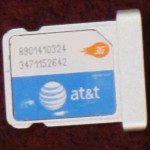 Reuters reports that the European Telecommunications Standards Institute (ETSI) is working on a proposal from Apple for an even smaller SIM card than those currently available, but I have to wonder to what end. Sure, a “nano-SIM” would be convenient for devices that are too small to accept the micro-SIM that’s used in the company’s iPad and iPhone 4 models, but in my experience, the 12mm-by-15mm micro-SIM is already at the lower end of human dexterity; that is, among adults at least. (All possible jokes about child labor and Foxconn failed my snicker test; they’re just too easy in this case.)

About the only application for which I could see the point of a SIM card that’s so small that it has to be handled with tweezers would be in something that I call an iWatch: an iOS device that’s small enough that you could strap it to your wrist, much like Dick Tracy’s 2-way wrist TV. Nifty, yes; but I’m just not sure how practical one of these would be. After all, the size of the SIM is hardly the limiting factor when it comes to “how small can you go?” The CPU, the battery, and the screen itself all enter into play, as does the standard 3.5mm headset jack.

I realize that Apple thinks of itself as the leader in consumer electronics right now, and in many respects, I’m inclined to concede that title to the company, based on its achievements with the iPod, iPhone and iPad. But there’s such a thing as getting too far in front of the crowd. Although there will undoubtedly be better ideas than the iWatch – and I would apply for the trademark on that this afternoon, if Wired hadn’t beaten me to the punch(line) – it remains to be seen whether this is a true engineering breakthrough, or just an attempt by Apple to corner the “nano-SIM” form factor for the immediate future.