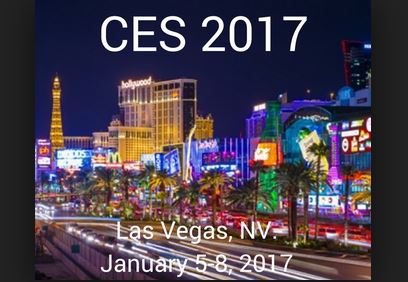 Headlining now at CES 2017: A home security system that doesn’t use cameras, a smart bicycle with touchscreen display and a patio umbrella with the intelligence to rotate toward the sun at all times.

These are but three of thousands of new and intriguing products that debuted Jan. 3 at the International Consumer Electronics Show, which is ingesting Las Vegas through Jan. 8.

An estimated 177,000 attendees have flooded the city of 603,488, boosting the number of inhabitants by a whopping 28 percent for most of the week.

Here are snapshots of a few innovative products being demonstrated at CES this week. eWEEK will have more product news as the conference goes on.

No Cameras Needed in This Home Security Setup

Cognitive Systems Corp. announced Aura, which it claims is the first smart home security system that monitors and protects the home without the use of cameras.
The easy-to-use and discrete two-piece system uses the company’s patented technology to monitor the disruption of wireless signals caused by movement in the home, sending notifications to household members when any unauthorized motion occurs in the home. Aura provides full coverage for the average home, even in rooms where people are typically unwilling to place cameras.
Aura’s accuracy is above those of other motion detection systems, since it is not dependent on light and recognizes the difference between human and non-human movement, the company said.
Starting Jan. 5, Aura will be available for pre-order here for $499, with a special price of $399 for a limited time during CES. Orders are expected to ship by Feb. 28, the company said.

The LeEco Smart Road Bike, which has been recognized as a CES Innovation Honoree, features an aerodynamic Toray T700 carbon fiber frame, fork, seat post, handlebar and wheels, while weighing in at a mere 18.5 pounds. With an 11-speed one-by drivetrain, the bike uses a single chain ring up front and a wide-range cassette in back, eliminating two-derailleur coordinated shifting.

Other components include lightweight brake set with dual-pivot technology, paired with shift/brake levers, mounted to a strong and lightweight carbon fiber handlebar.

LeEco’s Android 6.0-powered BikeOS system displays on a 4-inch touchscreen that runs on a quad-core Qualcomm Snapdragon 410 processor and is powered by a 6000mAh rechargeable lithium-ion battery.

The system provides turn-by-turn navigation tailored for bicycle riding from HERE Maps, online and offline music playback, walkie-talkie communication with other nearby compatible LeEco smart bikes, and ride logging. With the companion app, you can also review and share your rides with others.

Safety and security are always a concern; the new models offer automatic on-board lighting (front/sides), horn and security alarm. In fact, the bikes automatically notify its owner when the alarm is activated and tracks location via the mobile app. Additionally, the electronics in both models are water resistant to level IP54.

Smart Patio Umbrella Knows Where the Sunshine Is

ShadeCraft’s Sunflower, a first-of-its-kind intelligent patio umbrella, launched at CES. It is an automated umbrella that moves with the motion of the sun to keep its owner always in the shade, CEO Armen Gharabegian said.

–runs on solar power, tracking the sun’s movement throughout the day for optimum energy absoroption;

–can connect to other devices in a smart home; onboard cameras connect to users’ existing security to enhance home monitoring service;

–sensor optimized to recognize wind to close automatically, and to understand proximity to obstructions; and

The ShadeCraft team will be exhibiting at CES Unveiled and CES at booth 40530 (Smart Home Marketplace). Go here for more information.

AI Embedded into Toothbrush for Kids and Adults

Kolibree, a tech company focused on connected solutions in oral health, launched Ara, a CES 2017 Innovation Award Honoree and the first toothbrush with embedded artificial intelligence.
“Patented deep learning algorithms are embedded directly inside the toothbrush on a low-power processor. Raw data from the sensors runs through the processor, enabling the system to learn your habits and refine accuracy the more it’s used,” Kolibree founder and CEO Thomas Serval said.
Ara knows precisely where in your mouth you are brushing, even when not connected to the app on a mobile device. Whether brushing on or offline, brushing data (frequency, duration and brushed areas) is captured in the toothbrush and automatically synced via Bluetooth Low Energy (BLE 4.0) when the app is open.
Ara’s advanced offline mode is a new step for IoT in oral health. It’s the culmination of studying behaviors, over a three-year period, of more than 10,000 people who have used a Kolibree toothbrush, the first electric connected toothbrush, Serval said.

The company has learned that children are motivated to brush their teeth –and have learned to brush more effectively–when enticed by a mobile game, such as Kolibree’s Go Pirate, which is part of the Kolibree app.
Key features:

–Proprietary AI technology in the toothbrush in addition to 3-D motion sensors, accelerometer, gyroscope and magnetometer

–Kolibree Index on the mobile app (iOS and Android) displays your personal score based on cumulative online and offline brushing.

–Weighing only 2.5 ounces (70 grams), and with a 2-week battery life, Ara by Kolibree travels easily.

–Weekly e-mail report shows at a glance how well you’ve brushed over the last seven days.

OWC, which makes accessories for Macs and PCs, announced the OWC DEC, which it claims is the first storage expansion solution designed specifically for the 2016 Apple MacBook Pro.

The OWC DEC dock enables users to extend the life and the functionality of the high-end 2016 MacBook Pro. The DEC is the latest in OWC’s long line of upgrades for nearly every Mac made, the company said.
The OWC DEC attaches completely flush to the bottom of the 2016 MacBook Pro, providing additional flash storage and connectivity, ultimately increasing the performance of MacBook Pros. With the OWC DEC, users will get an enhancement path for their 2016 MacBook Pro and MacBook Pro with Touch Bar to keep their system upgradable for the long term in a clean and integrated fashion.
This dock has a range of features, which include:

–up to 4TB of additional Flash/SSD storage (for a maximum of 6 TB, including factory capacity);

–USB 3 Type A Ports for standard USB cabled devices; and