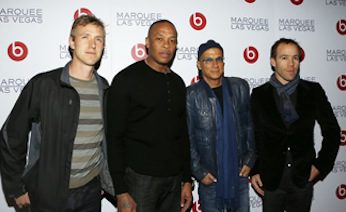 Reuters reported on the meeting March 6, giving fuel to rumors that Apple is looking to offer a streaming music service, in addition to its iTunes offering.

Beats, which is partially owned by Apple rival HTC—”rival” being used lightly, given HTC’s shaky standing in the market—introduced Daisy in January, with Iovine saying it would bring a “cultural context” to the digital music landscape and return an “emotion connection” to the act of discovering music.

Ian Rogers, a former Yahoo general manager and CEO of Topspin, was named CEO. In a statement lacking in specifics, Rogers said that current streaming experiences weren’t good enough for fans or artists—suggesting that Daisy will help change both.

On March 6, Beats announced that it had received $60 million in funding for Daisy from a group of investors led by billionaire Len Blavatnik, owner of Warner Music. It plans to now spin off the service as an independent company in late 2013.

Beats bought streaming music service MOG Music in July 2012 for $14 million, and in Daisy is working to build a competitor to Spotify—which has 20 million-plus users—and similar services.

“Beats was always about helping people rediscover the magic in the experience of listening to music,” Iovine said in the March 6 statement. “Now that we are well along the way to addressing the quality of audio playback with Beats headphones and speakers, Daisy allows us to reintroduce the same magic into the process of music discovery and consumption.”

As was announced in January, Trent Reznor of Nine Inch Nails will be Daisy’s chief creative officer.

“Beats has the vision, the brand, the management team and now the investor group to effectively change the expectations and experiences of a music subscription service,” Blavatnik said in the statement.

Google, a truer Apple rival, is said to be also working on a music service. Google brand YouTube, the world’s largest trove of digital streaming media, is planning to launch a subscription music service late this year, Fortune reported March 5, citing a source in the record industry.

“The service has its own negotiating team and operating unit but will likely have some overlap with new features also rumored to be coming to Google’s Android music platform, Google Play,” Fortune reported.

While Android is a locker for songs, the new YouTube service will allow anyone to listen to tracks for free—though both “are said to be adding a subscription fee that will unlock additional features,” such as ad-free listening, the news site said.

IE Market Research Corp. has forecast that revenue from digital music will increase from 2011’s $9 billion to $18 billion in 2016.