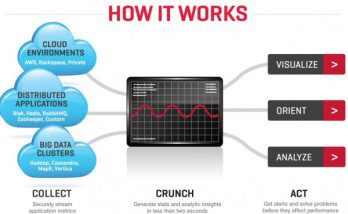 AWS is the first billion-dollar-per-year cloud services business and is far and away the largest provider of hosted Web services in the industry.

“We could see the some geographies starting to be affected a full two hours before Amazon itself put up a notice on the Website,” O’Connell said. “This predictive ability is a valuable thing to have if you’re running all or part of your business on AWS.”

“A customer of ours detected (a recent) Azure outage 15 hours before it was announced by Microsoft,” CEO Gary Read said. “Now we’re putting even more advanced analytic and reporting capabilities in the hands of our customers. Before traditional monitoring tools have even processed their next set of samples, Boundary has identified abnormalities in cloud infrastructure and alerted users to potential problems.”

Boundary has also added a big-data store that enables customers to stash detailed performance data for long periods, as well as a reporting component that will automatically compare historical and current performance metrics, and email the summaries to customers.

“Applications hosted in the public cloud — even more than traditional infrastructures — require constant and vigilant monitoring,” Read said. “But because the public cloud is dynamic in nature and does not expose critical items such as topology, traditional solutions are typically out of date and too late in reporting problems.”
Boundary collects previously unexposed data every second, understanding the dynamic application topology, learning the normal behavior of applications on a minute-by-minute basis, and providing real-time, analytics-driven warnings on performance abnormalities, Read said.