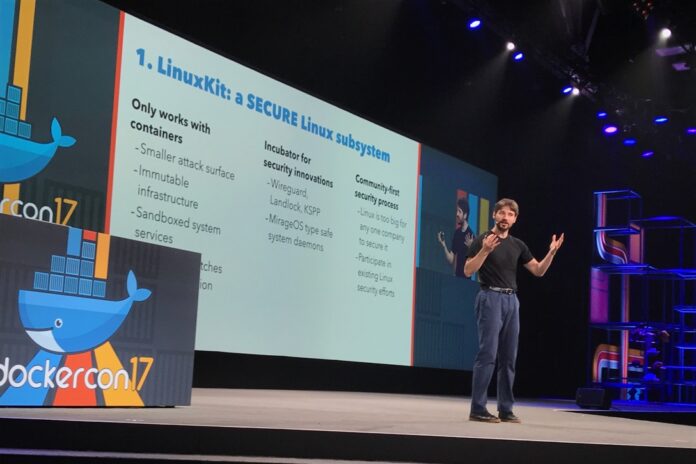 AUSTIN, Texas—The DockerCon 17 conference got underway today with Docker Inc. making two major Linux-related announcements. Linux has long been at the core of the container movement and is even more so now with today’s debut of the LinuxKit and Moby Project efforts, which aim to help developers and organizations build their own container-optimized Linux distributions.

“A year ago we were faced with the challenge of going multiplatform,” Solomon Hykes, founder of Docker, said during his DockerCon keynote (pictured). “Not every platform provides a Linux subsystem.”

That’s why Docker built a Linux subsystem, which is now becoming the LinuxKit Project. Hykes said that when everything is a container, there is the potential for improved security. With the operating system as a container, the overall system can be very small with minimal boot time.

LinuxKit is portable and will work with desktop, server, internet of things (IoT), mainframe, Intel, ARM, as well as bare metal and virtualized deployments, according to Hykes.

The LinuxKit Project will be managed under the governance of the Linux Foundation and is intended to be a vendor-neutral open project. LinuxKit is based on the same tooling that Docker Inc. uses to build the Linux that powers the Docker for Mac and Windows clients, Patrick Chanezon, member of the technical staff at Docker Inc., said in an interview with eWEEK. Docker first released Docker for Windows and macOS in March 2016.

LinuxKit should not be confused with Alpine Linux, which is a container-optimized Linux distribution that Docker has used in the past. Docker employs the lead developers behind Alpine Linux, though Chanezon emphasized that LinuxKit is different.

The goal with a container-optimized Linux is to have a smaller operating system that is purpose-built for container use cases. With LinuxKit, Docker is aiming to make it easier for anyone to build an operating system base on which containers can be deployed.

“The Moby Project is a framework to assemble specialized container systems without reinventing the wheel,” he said. “It has a library of over 80 components including all the vital parts needed for a container platform.”

The Moby Project builds on top of LinuxKit and other efforts from Docker to help a developer rapidly build and deploy a container platform. Hykes said Docker Inc. will be using the Moby Project to help build its own platforms as a base that enables common assembly.

The Moby Project is open and will be a community-run project, he said.

“Openness is important because it’s the only way things work for us,” Hykes said.