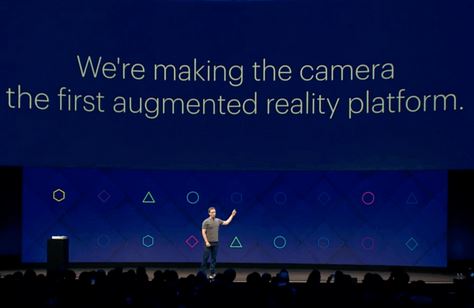 Silicon Valley staged some progressive IT events this past week, with Facebook F8 in San Jose, Amazon’s AWS Summit in San Francisco, an IoT preview put on by HPE and GE in Santa Clara, Calif., and probably others we couldn’t get to.

eWEEK has and/or will touch on highlights of these events. We’ve already covered F8 and AWS Summit pretty closely; go to those links to see a list of those and related articles. But for sheer innovation news, it’s hard to dispute that F8 took the blue ribbon home to Menlo Park this week.

Reason 1: How many companies admit that they want to read the minds of their customers?  Facebook said that this week.

Reason 2: How many companies predict that smartphones will go away and eventually become glasses by 2022? A Facebook executive said he believes this will happen.

Reason 3: How many companies want to get augmented reality implanted on your smartphone (ostensibly before it turns into a set of spectacles) as soon as possible? Right, that would be Facebook.

We could go on. In this context, we offer a virtual highlight reel of F8 2017.

Typing by Using Only Your Brain

Facebook revealed April 19 that it is developing what it calls “brain-computer speech-to-text interface” technology. This is aimed at translating a person’s thoughts directly from his or her brain to a computer screen without need for speech or fingertips.

Speech alone seems simple enough to move machines, but thoughts only? We are moving into the deep future here, it seems. The idea is that this technology will be able to take what you’re thinking to yourself in silence, using non-invasive sensors that can read exactly what you intend to say, and turn it into readable text.

Talk about personal data privacy. That will be nothing compared to keeping one’s personal thoughts private.
At the conference, Facebook’s Regina Dugan displayed video of a woman from a Stanford research experiment who could type eight words per minute using a small electrode implanted into her brain; she was able to move a computer cursor over a keyboard.

Dugan said that Facebook’s goal is to create–for use in a “few years”–software that could autonomously type 100 words per minute based on a person’s thoughts.

Once that IT gets commercialized, one can only imagine what other use cases thought-to-tech-to-action will come about–especially in the coming age of IoT. The “Wall-E” syndrome may not be as far away as one thinks.

Smartphones could become obsolete, replaced by AR glasses by 2022–or at least one Facebook exec, Michael Abrash, believes this is possible. The company that bought Oculus Rift for $2 billion in 2014 for its virtual reality headset clearly has a vested interest in getting smartphones replaced by VR or AR glasses.

Abrash, chief scientist of the social network’s Oculus Research, is deep into working on virtual reality headsets and augmented-reality glasses.

Abrash said at F8 that he envisions glasses that look just like today’s regular glasses but with the power to enhance the wearer’s memory, provide instant translation of foreign languages and signs, mute distracting nearby conversations or sounds and even read a baby’s temperature with a glance.

This would be a big step up over Google Glass, which was introduced in 2012 and fell flat on its lenses only a year or so later. This was largely because the wearers of Glass seemed super-entitled (to the annoyance of non-wearers) and because regular people didn’t trust that Glass wearers weren’t invading their privacy by shooting video of them when not notified.

Versions of this, however, are being used in the real world. For example, Amazon is using Google Glass-like instruments in some of its warehouses to help workers identify products inside stacks of crates without having to keep referring to a clipboard or spreadsheet.

Facebook CEO Mark Zuckerberg thinks experiencing augmented reality through glasses is still a few years away, but that’s not stopping his company from exploring it.

Rather than glasses though, Facebook will focus on a camera platform. “In the last few years we’ve seen primitive use cases on phones and cameras. Today we start together and make the camera the first augmented reality platform,” Zuckerberg said onstage.

Facebook’s Camera Effects Platform software for developers includes advanced computer vision technology that recognizes objects in the real world and provides the means for developers to augment them with overlays.

Besides augmented reality and virtual reality applications, it introduced Facebook Spaces to enable users to interact with their friends and contacts in virtual environment.

In addition, Facebook Workplace, the company’s alternative to the Slack workgroup collaboration platform that so far has gotten off to a slow start, received a much-needed boost at the show. Ultimately, Facebook is developing new ways to encourage users to maintain and deepen their engagement with the world’s largest social network.

Surprisingly, Facebook talked very little about social networking at F8. Rather, it focused on technologies that use the social network as a springboard for new experiences, such as Spaces and Messenger. The market has moved beyond focusing solely on social networking.

Facebook continues to develop its Messenger app, as more and more people switch over to instant messaging in place of email. Companies now have tools to expand their presence on Messenger. A new Smart Replies function speeds response to frequently asked customer questions on their company pages. Facebook has developed a new hand-over protocol so companies can work with multiple developers to create different Messenger experiences.