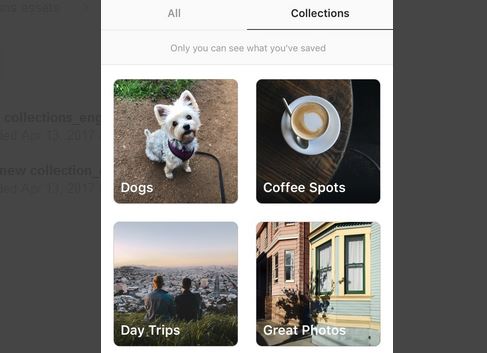 However, Instagram, which Facebook bought in 2012 for $1 billion, is starting to make new headway into this hierarchy of networks by adding features on a frequent basis.

Instagram–which had always been a one-off type of application–announced April 17 that it is now enabling users to organize saved posts into private collections. Users can tap and hold a saved post in order to add it to a new or existing private collection, and only those individual users can see them. When a user saves someone’s post, they’re not able to tell that you’ve saved it.

Instagram finally introduced the ability to save posts in December, and it’s been a hit; nearly half (46 percent) of users have saved at least one post, the company said. So the network, which runs independently from its parent company’s network, looks like it may be on to something.

To learn more about how to save collections, go to the Instagram Help Center.

This update is available for iOS and Android in the Apple App Store and Google Play as part of Instagram version 10.16.