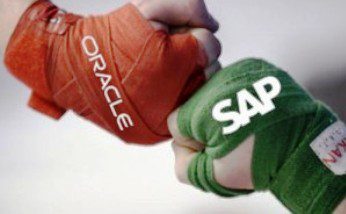 When he introduced his company’s new 12C in-memory database Sept. 30 in the opening keynote of Oracle OpenWorld 2012, Larry Ellison included a not-so-subtle jab at competitor SAP.

It’s certainly not unusual for Ellison to throw a punch in public at a market foe; in fact, it’s pretty much standard procedure for him once he gets on stage. His favorite targets, of course, are IBM and German enterprise software maker SAP.

This time, SAP took a direct hit from the billionaire CEO and company co-founder. Ellison was extolling the advantages of his company’s new database, designed expressly for processing big data workloads such as cloud services, financial transactions, and large dataset analytics. His 50-minute monologue on several new Oracle products included this excerpt:

“Now we’re doing everything so much faster,” Ellison told about 6,000 OpenWorld attendees. “We do everything in (NAND) flash, and we do ‘writes’ 20 times faster. We use less power. Everything’s faster with the Exadata X3. When we started out in 2008, we had a partnership with HP to make the first Exadatas, which incidentally had disk drives and RAM, but no flash. After we bought Sun Microsystems (in 2010), we made our own Exadatas and added flash into them, first a little at a time, then more. We went from being a data warehouse machine to handling online transaction processing to today, handling multiple massive databases — all in memory.”

Ellison Goes Off Script
Then Ellison decided to venture off script, undoubtedly to the consternation of his media people and other colleagues.

“SAP has an in-memory machine, you know, that’s a little bit smaller than what we offer,” Ellison said. “We have 26TB of memory; they (SAP) offer point-five (0.5TB) terabytes of memory. It’s called HANA; her name is HANA. I promised Mark (Hurd) that when I did this presentation I was not going to mention them, I’m glad to keep the promise. The HANA in-memory machine is like really small.”

Actually, the X3 carries either 2TB or 4TB or DRAM and up to 22TB of NAND flash memory, so technically, the 26TB of solid-state memory and storage is correct — when you add up the different components.

HANA, SAP’s implementation of in-memory database and a project that has been described by some industry observers as company co-founder Hasso Plattner’s crowning achievement, was introduced in December 2010. It already has more than 600 enterprise customers worldwide and is rapidly ramping up in sales.

As one might imagine, Ellison’s assessment took SAP quite by surprise.

“When I read what he (Ellison) said, and then watched it (the video) to get the context, it literally took me about a full day to get my jaw back into position. It was like, ‘Are you for real?'” Steve Lucas, executive vice president of Business Analytics, Database and Technology at SAP, told eWEEK.

Ellison said several things that were not accurate, Lucas said. “There’s no basis in fact at all about the half-TB claim; it’s so far from the truth, that I had to react,” he said.

“First of all, the whole comment about ‘SAP is small, and we’ve got the big system,’ is just foolishness,” Lucas said. “Here’s the reality: IBM has already shipped the world’s largest in-memory database for SAP HANA. We already have it: It is a 100TB in-memory system.”

This 100TB IBM HANA analytics system, launched last May at SAP’s Sapphire conference in Orlando, Fla., is in operation in Santa Clara, Calif. Here are some videos of that launch event.

“My perspective is that his (Ellison’s) scale is so off, it’s almost an order of magnitude off,” Lucas said. “If Larry’s talking about our TCO being smaller, all right, I agree with the guy. But if he’s talking about scale — he and Oracle in general are on another planet on that one. From my perspective, these are exaggerated, baseless claims about their capability. We’ve been doing this for a year and a half.”

Lucas: ‘Oracle Does Not Get It’

The second thing, Lucas said, is that “Oracle absolutely does not get it. The world has changed. We’ve gone from a world that needed a database to power a business application — which oh, by the way, that was like 30 years ago — to a world that needs a place to store the data, yeah, but you need something that also analyzes it and looks at it to predict future behavior and do things like analyze social data,” Lucas said. “It’s a dramatic difference from 10, 20, 30 years ago.

“I just think Larry’s stuck in this ‘delivering orange-countertops-world,’ where it’s like, ‘Nobody wants that,'” Lucas said. “What they want is a real-time business platform that does a lot of things.”

“Here’s where the Oracle logic completely falls down,” Lucas said. “OK, so great, I have a database. Now what? Oh, I still have to go get the analytics — the predictive, the semantic, the planning capability — and cobble all that together. This is the fundamental failure of Oracle; by the way, thank you, Larry, for acknowledging that SAP is No. 1 in business apps — there’s a reason for that. It’s because we understand that the customer needs more than a database.”

HANA is not about cobbling together some things to create a business platform, Lucas said.

“We’re saying it’s about needing a platform that does these broad things for a business app. It’s not about cobbling things together and throwing more hardware at it because you’ve got this albatross around your neck called Sun. It’s about real innovation,” Lucas said.

“If he wants to go toe-to-toe in terms of scalability, we say ‘Bring it on!'” Lucas said.

Vishal Sikka, SAP’s executive board member in charge of technology and innovation, called HANA “breakthrough analytics to enable businesses to explore and act on big data.”

In-memory computing will at the same time let businesses simplify their IT infrastructures by reducing the need for data caches and similar technologies.

HANA is one of the foundations of SAP’s overall strategy, which also includes cloud and mobile computing that recent acquisitions Sybase and Syclo bring to the company.

HANA has four parts: the database software itself; HANA Studio, a suite of tools for modeling; HANA Appliance, which is the DB installed on partner-certified hardware as an appliance; and HANA Application Cloud, which is the cloud-based infrastructure for delivery of applications. Typically these are existing SAP applications rewritten to run on HANA.