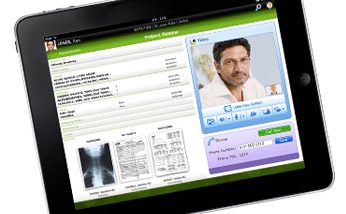 Roy Schoenberg, American Well’s CEO and Douglas A. Gentile, Allscripts’ chief medical officer, discussed the benefits of the integration along with the future of telehealth in a session at the New York eHealth Collaborative conference here on Oct. 15.

Allscripts will integrate the voice and video interactions of its Online Care platform side-by-side in its EHR platform with patient histories, doctors’ notes and prescription information.

By integrating telehealth and EHRs, providers will be better able to coordinate care.

“It’s very difficult when you have siloed practices that are not interconnected,” Schoenberg told eWEEK. “Each has its own [EHR]; each has its own scheduling system.”

Telehealth is a way for providers to implement the Affordable Care Act and maintain accountability for patient outcomes, including managing chronic diseases.

“Telehealth in an accountable care organization [ACO] is a no-brainer,” said Gentile.

Having a telehealth session built into an EHR application allows doctors to view prompts to act on during the visit, such as asking why a patient hasn’t followed up with an eye doctor, said Schoenberg.

The two companies first announced the partnership Aug. 15. The integration will be complete in January, Allscripts reported.

The two companies intend to achieve seamless integration between the telehealth platform, EHR app and a physician’s workflow, according to Gentile.

“If it’s not, if it’s extra work and extra time for the physician, they’re not as likely to adopt it,” Gentile told eWEEK. “So it’s really about making sure it integrates seamlessly in their workflow and that it’s pretty simple.”

“Even if it’s not innovative, you have to speak the language of the health care systems out there and build assets to work with systems without asking them to change to a modern one,” he said.

Health care systems will likely remain unchanged for many years, said Schoenberg. “If you want to work with them, you have to work the way they do, and we’ve done that.”

When doctors need to refer a patient during a session to a specialist, such as a cardiologist or nutritionist, American Well’s Online Care platform allows them to make a seamless “warm transfer,” said Schoenberg.

While viewing the session on an iPhone, iPad or Android device, patients can also connect medical diagnostic devices to enable doctors to collect vital data online.