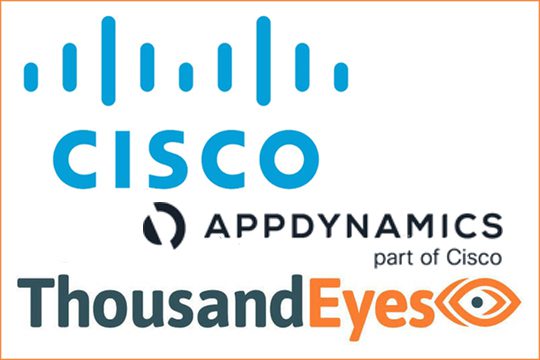 Typically, the teams that manage applications operate in an independent silo from the staff that runs the network. Given how network centric businesses have become, correlating application data with network information is something that’s inevitable, so Cisco was prescient to get a jump on the industry.

Earlier this year, Cisco made another interesting move when it acquired internet and cloud monitoring provider ThousandEyes. This was another move that was outside of Cisco’s traditional business focus; almost all of Cisco’s core network products are focused on corporate private networks. Cisco’s interest in ThousandEyes makes sense because more and more customers are looking to use cloud applications and infrastructure. So, in essence, the internet is now part of the company network.

One of the items I wanted to drill down on is how the COVID-19 pandemic has impacted IT organizations. It’s been well documented how the pandemic has forced users to work from home, caused companies to accelerate digital initiatives and pushed many companies to function in a way that’s outside their comfort zones. One of the most undertold stories is that it’s also had a profound impact on IT departments. Historically, IT had tight control over everything; people worked on private networks with IT-purchased devices using apps that were sanctioned and secured by IT.

Now, with everyone working from home, businesses have pivoted as much functionality as they could to the cloud, into which IT has little to no insight. Also, users are working at home, sometimes on personal devices. This means a worker is likely sharing the network with other household members, using Webex to connect with schools and Netflix to be entertained.

Now, when a user is having problems with one of many cloud-based apps, the IT department needs visibility into the home network, internet and applications; the combination of AppDynamics and ThousandEyes can deliver this because it can correlate application problems with internet problems and other external networks that lie outside enterprises’ control.

For example, if a user calls in with a subscription service issue, AppDynamics could tell the app was performing sub-optimally, and ThousandEyes could isolate the problem to the cloud provider. This saves hours and hours of troubleshooting time and puts IT in a position to inform the company proactively about when the issue started and when it is resolved.

Acceleration of digital transformation puts more pressure on IT

Another COVID-19-induced change that’s putting pressure on IT is the acceleration of digital transformation. Prior to the pandemic, almost all organizations had digital transformation on the radar, but many non-digital native companies were taking their time. COVID-19 forced companies to accelerate their timelines. This is something Tong and I discussed at length. She summed it well when she said: “The conversation has changed. There’s a real fire under IT organizations as they know they have to transform. A year ago, there wasn’t the same level of urgency that exists today.”

One of the enabling technologies for digital transformation is the cloud, and this is where AppDynamics and ThousandEyes can add significant value. One of the more interesting features AppDynamics offers is that it can decompose a business into smaller sub-processes and help IT organizations understand which parts of a process are the most in need of transformation. As these changes happen and some or all of a process moves to a cloud, ThousandEyes can be used to visualize and understand performance  baselines and then measure the changes. So AppDynamics helps direct and focus resources and ThousandEyes’ intelligence platform can see how the network responds across these third-party environments and where upgrades may be needed.

Some companies I’ve interviewed have tried to use their legacy management tools as they move workers to home and transform digitally, but these don’t cut it today. Lad and I spoke at length about this. He explained that traditional tools were designed for an era where IT controlled everything and, as previously discussed, that’s not the case anymore.

Lad told me: “The cloud has become the new data center, the internet is the new network and SaaS is the new application stack, and packet capture tools simply don’t work in this new enterprise reality.” He went on to ask the rhetorical question: “If your employees are sitting at home offices using their suite of work-related apps and bypassing all of your data center tools, how does packet capture work in that scenario? ThousandEyes is purpose-built to provide that visibility beyond the traditional enterprise perimeter.”

Both ThousandEyes and AppDynamics are well aligned to focus on performance rather than up/down monitoring. Traditional management tools are built on having a dashboard that shows elements that are green (up) or red (down).

However, infrastructure is built with so much redundancy that things are rarely down. The bigger problem is when things are green, and apps aren’t performing properly. This is a much more difficult problem to solve. This is particularly true with cloud apps as the Internet with its thousands of independent networks appears to be a “black box” to management tools.

AppD + ThousandEyes can break down IT silos

One last point, the combination of AppDynamics and ThousandEyes helps with breaking down the silos between the application and network groups. These two groups have worked at odds for years but that helps no one, particularly the end users. Given the shift to work from home, the migration of applications to the cloud and the rise in real-time apps–like video in Webex–IT departments need to unify network operations and the application group and this requires a single source of truth, which is exactly what the combination of AppDynamics and ThousandEyes provides.

If you want to learn more about this, I’m actually hosting a webinar on this topic with Linda Tong and Mohit Lad. The webinar will be on Tuesday, Oct. 27 at 10am PT / 1pm ET, and you can register here.