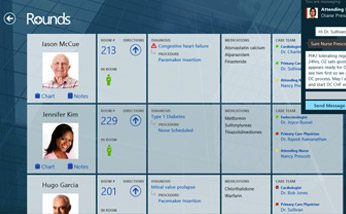 Making the “rounds” of a hospital could get more mobile and unified with a new prototype Windows 8 application Microsoft has demonstrated. It allows doctors to manage a patient’s hospital stay and boost communication with care teams.

The app, named “Rounds,” integrates functionality from Microsoft applications such as Lync, the company’s unified communications platform. Doctors can click on a grid of patients, view their electronic health records (EHRs) and hold a conference with a specialist in a pop-up window.

“It’s a prototype to show what is really possible with Windows 8 and Office 365 that’s going to really enable providers and care teams to be productive and efficient anywhere, any time,” Schmuland told eWEEK during a demonstration of Rounds in New York.

Rounds incorporates the touch-screen capabilities of Windows 8 tablets such as Microsoft Surface to allow doctors to locate patients and initiate instant-messaging sessions with nurses.

A tablet’s touch-screen allows doctors to use gestures such as pinching to increase or decrease the size of a hospital floor map as they locate patients. Physicians or nurses can use a stylus to draw on diagrams to show patients how a pacemaker insertion procedure might occur. They can circle a map of the heart using their finger or a stylus and save the diagram as part of a patient’s EHR, said Schmuland.

Rounds features both a doctor’s view and a nurse’s view. It’s designed to present care providers with their daily workflow, starting from the moment they drive up to the hospital and continuing through the day as they work with patients, said Schmuland. It allows doctors to follow patient treatment from admission to discharge.

It also eliminates the need for pagers as Lync enables health providers to send email or instant messages, or communicate through voice in Rounds.

Communication is often a challenge for doctors that could delay tasks such as discharging patients.

“Physicians don’t have the time or can’t find each other to communicate at a convenient time, so by building this into the applications, we’ve made it less time-consuming for communication to occur between clinicians—and even nurses,” said Schmuland. “It allows beds to be freed up earlier, and decreases the stay for patients and the cost.”

Members of multidisciplinary care teams can stay connected by transferring calls through the app to a Bluetooth earpiece while making the “rounds” in a hospital, according to Schmuland.

“It’s a challenge to be productive while you’re mobile, and physicians are extremely mobile,” said Schmuland. “They’re moving between patients, between rooms and between facilities.”

Mobile apps such as Rounds could help multidisciplinary teams improve the quality, safety, speed and outcomes of care, Schmuland noted.

In addition, built-in integration with OneNote allows patients to handwrite patient notes directly onto a Windows 8 tablet screen. Patients can also sign consent forms as part of the workflow in Rounds.

The application is an example of how Windows 8 can combine the functionality of a full PC within the interface of a tablet, Schmuland suggested. Managing a hospital workflow on a Windows 8 tablet could eliminate “device fatigue” as doctors often have to switch to a smartphone to take a call from patients or switch between a PC and tablet, said Schmuland.