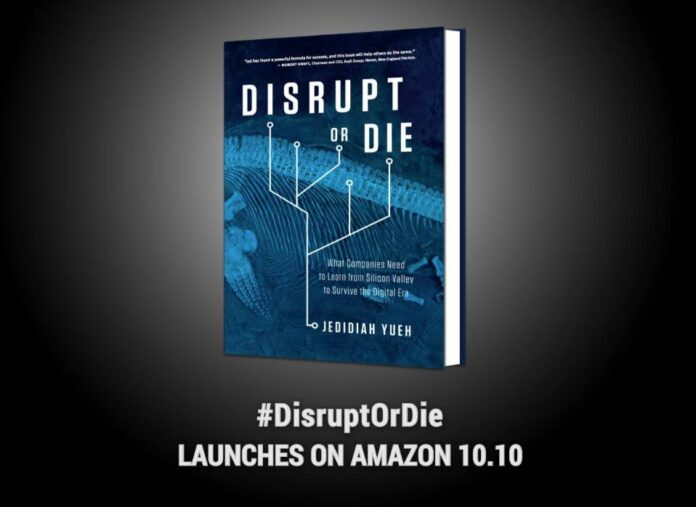 By the calendar, Jedidiah Yueh isn’t very old, but businesswise, he operates far beyond his years.

After 20 years of building software companies, Yueh, 43, has published his first book, “Disrupt or Die: What the World Needs to Learn from Silicon Valley to Survive the Digital Era.” It became available Oct. 10 on Amazon.

There are certainly lots of good books out there about starting new companies, but there aren’t that many from new-generation thinkers like Yueh.

“I was an English major in college, and I thought I would have a career in writing books. And then I accidentally fell into software and built two software companies,” Yueh told eWEEK.

The Harvard-educated Yueh’s first company was Irvine, Calif.-based Avamar, which made software so effective at deduplicating files inside storage that it caught the attention of EMC, the world’s largest storage hardware and software maker. In 2006, EMC bought seven-year-old Avamar for $165 million, making Yueh a multimillionaire at the tender age of 32.

Avamar’s secret sauce, by the way, now flavors most of the Dell EMC empire and has been a billion-dollar business for that corporation for several years.

Yueh stayed with EMC for a year or so after the acquisition, but he eventually decided that his startup inclinations needed to be satisfied again. So he created Delphix in 2008, based on the idea that virtualizing databases and making multiple copies of them (without disrupting production) would be useful for database administrators.

That the idea was useful is a massive understatement; Redwood City, Calif.-based Delphix is now a multibillion-dollar company and growing fast. In fact, it has transcended its original mission and is now pioneering data management in a new market called DataOps.

“Over my career, I’ve collected and implemented a series of frameworks for innovation that have made me successful and been the keys to driving more than $4 billion in software sales,” Yueh said. “I’ve written this book to share what I’ve learned. I believe it’s easier than ever for anyone to drive disruption. In a way, I’ve been writing, or living, the book for the last two decades.”

Details About His Methodology

In “Disrupt or Die,” Yueh talks in detail about his methodology in creating products, assembling an engineering team, building up the company, scaling up the products and so on. “It’s all about taking the things I’ve been using for two decades and putting them into the innovator’s journey,” Yueh said.

But there is another, larger-world view that Yueh also brings to the book.

“Software is definitely transforming a lot of businesses and industries, but its impact on society, on capitalism, on democracy, on the world at large is really profound,” Yueh said. “One of the things I think is misunderstood today is how difficult and complex it is to think about and deal with a world that’s being powered by software.

“A lot of these big technology companies, the tech superpowers as I call them, have missions that are very noble and good. But they actually end up having these unintended polar consequences. They do the exact opposite of what they set out to do.”

How Software Companies Can Have Unintended Consequences

“You look at a company like Facebook,” Yueh said, “where their mission is to bring people together, and yet they divide societies and nations and filter bubbles. (CEO) Mark Zuckerberg just revealed the other day that they exposed 10 million people to Russian ads that potentially could have swung the (2016 presidential) election.

“If you go all the way back to Adam Smith and “The Wealth of Nations” (1776), when we first talked about concepts like externalities, such as the Exxon Valdez oil spill (on March 24, 1989), companies have to make right the externalities of the world,” Yueh said.

“But what if one of those externalities put the president (Trump) in office? Think about that as an externality. That’s an incredible, ridiculous, almost hard-to-think type of externality.”

An externality is a side effect or consequence of an industrial or commercial activity that affects other parties without this being reflected in the cost of the goods or services involved.

“And how do we grapple with things like that as a society? Software isn’t just disrupting people’s lives, companies and industries; it’s disrupting the entire world,” Yueh said.

Yueh believes that tech innovation over the last two decades was centered largely in Silicon Valley, but that it’s slowly breaking down and becoming more distributed over time.

“One of the goals of the book is to share everything I’ve learned about building a software company with the rest of the world. I think it’s important for us as a country and as a society to spread innovation throughout all of their centers, otherwise you end up with this growing divide between the technology leads and the rest of the world, and that divide is not sustainable,” Yueh said. “It creates a weak foundation for democracy and countries, so it’s really important to democratize innovation.”

This is precisely why the open-source community has become so instrumental in the world we have today.

New Roles for Proprietary IT?

In the big picture, however, is there still a place for proprietary enterprise IT? Obviously, there are still important needs for certain types of closely-held software, especially in military, scientific and government use cases, but companies like Microsoft, Oracle and SAP—previously famous for their proprietary property—have changed their focuses in recent years out of necessity.

“That’s a great question. With what’s happening in the world today because of open source, and all the sophisticated, freely available services provided by cloud vendors, there’s more and more innovation that’s accumulated that you can take advantage of to create an app or a new product,” Yueh said. “So what’s happening is that the proprietary layer is getting thinner, and thinner, and thinner. This is making it easier and easier for individuals or small teams to disrupt large industries, large companies, or even the world.

“So it’s all of that: the open source movement, the cloud with all the infrastructure you can use by the drip, and the sophisticated services like AI (artificial intelligence) that you can use from Google or from Amazon. As you add all those together, and you can combine them very quickly today, all you need is a thin layer of proprietary or innovative thinking or technology, and you can package it up into a product or company and begin to scale it.”

Yueh now resides in Newport Beach, Calif., serves as executive chairman of the Delphix board of directors and has left the day-to-day operation of his company to CEO Chris Cook, the former New Relic chief executive.

“Disrupt or Die” explains how Yueh used these principles to get to where he is today—residing in a Southern California beach town and being able to do what he wanted to do all along: write books.

Will he start yet another company? Check back here on eWEEK and we’ll let you know.