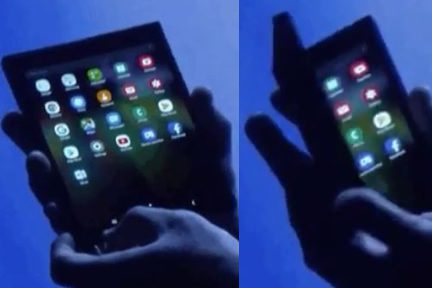 At Samsung’s SDC developers’ conference in San Francisco this week, the South Korean IT hardware and software giant introduced new-gen developer tools for its Bixby and SmartThings analytics platforms and to build mobile apps for its new One UI platform and the ground-breaking Infinity Flex Display.

This phone, which is expected to go into production in Q1 2019, features a tablet-sized screen that can be folded vertically to fit into a pocket or purse (see image at upper left); when opened it has a larger screen than the typical smartphone, offering easier access to apps, images and video. The device features a cover display that acts as a phone along with a main 7.3-inch tablet display.

Samsung has been leaking information to the media about its foldable Infinity Flex Display smartphone for weeks, and the SDC is where the company decided to show it for the first time.

The high-level idea for the entire conference is for the company, whose smartphones, video screens and other products are globally pervasive, is to make it easier for developers and business partners to efficiently build, launch and scale new applications for those millions of devices around the world.

Samsung Moving Up in the Developer World

Normally, one doesn’t think of Samsung as necessarily being a haven for the worldwide development community. But since it has become the No. 1 maker and distributor of smartphones (Huawei is now No. 2, with Apple No. 3), its reputation as being strictly a leading IT hardware vendor has changed significantly.

“We have achieved significant advancements in AI and IoT, which will be crucial to bringing our connected living vision to life,” D.J. Koh, President and CEO of Samsung’s IT and Mobile Communications Division, said in a media advisory. “The progress made to Bixby and SmartThings opens a new chapter where third-party products and services can be integrated to the AI and IoT platforms at scale.

“The foldable display lays the foundation for a new kind of mobile experience.”

Also on Nov. 7, Google announced Android support for this new foldable smartphone form factor, so the starting software support is in place and is expected to continue over time.

Bixby started as an intelligent interface, a practical way to use voice to interact with your phone. And it has tough and entrenched competition in Siri, Google, Cortana, Alexa in other devices. But Samsung is evolving it into a scalable intelligence platform to support a set of diverse products and services. At SDC 2018, Samsung showed developers new ways to bring a more conversational, personal and useful intelligent assistant experience to more consumers.

To make it easier for developers to create services powered by Bixby, Samsung introduced the following:

Samsung is promoting the idea of “share app ideas and share alike”; write an app for a smartphone and modify it using Developer Studio into a home-based app for the Samsung platform, if desired.

As part of its efforts to scale up Bixby services, Samsung is expanding support to five new languages in the coming months, including British English, French, German, Italian and Spanish.

It’s All About a Connected Lifestyle

Samsung says its connected living strategy is centered around an open IoT ecosystem that “unites the growing number of connected devices on a single platform.” Available in more than 200 markets around the world, SmartThings offers a connected experience in a single app, bringing IoT into the smart home, the car, office and everywhere in between, the company said.

Samsung is now making it faster and easier for developers to connect their devices and services to the SmartThings platform with a new suite of tools in the redesigned SmartThings Developer Workspace. These enhanced tools include SmartThings Cloud Connector, SmartThings Device Kit and SmartThings Hub Connector. Developers can build and launch on the platform, as well as easily integrate cloud-connected, Zigbee and Z-Wave devices.

Samsung introduced a new interface design called One UI. Its minimalstic design keeps the most relevant content on the bottom half of the screen, making it more natural and comfortable for one-handed use, the company said. The experience was reengineered to reduce clutter and distractions, allowing the user to better focus and quickly navigate their phone.

Samsung said the Infinity Flex Display together with One UI delivers a new kind of mobile experience that allows users to do things they couldn’t do with an ordinary smartphone. For example, users now can have a compact smartphone that unfolds to reveal a larger immersive display for multitasking and viewing content. The app experience transitions from the smaller display to the larger display as the device unfolds. In addition, users can browse, watch, connect and multitask without losing a beat, simultaneously using three active apps on the larger display.