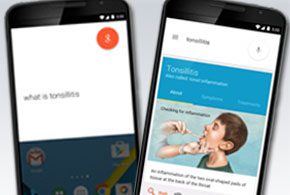 In a move that is sure to appeal to hypochondriacs everywhere, Google will soon start serving up what it claims will be high-quality medical facts on more than 400 common health conditions via Google Search.

Users researching common, and not-so-common, ailments on Google will get relevant data on the topic that the Internet search giant claims has been carefully compiled and curated with the help of a team of medical doctors from Google and the Mayo Clinic.

Starting later this week, Google will use the information cards to give users facts on the typical symptoms and treatments associated with different medical conditions along with details on whether the condition is critical or contagious. In some cases, Google will also serve up high-quality illustrations, supplied by professional medical illustrators, to go along with the medical data.

The 400 medical conditions on which Google has compiled data so far is only the beginning. The company will make similar information available on other medical conditions as well, a Google spokesman said Tuesday. More than 11 doctors on average have reviewed each bit of medical data that will be presented by Google, the spokesman added.

“All of the gathered facts represent real-life clinical knowledge from these doctors and high-quality medical sources across the Web,” Ramaswami noted. He cautioned that the medical facts that Google will present are for informational purposes only and not intended to replace medical advice.
“But we hope this can empower you in your health decisions by helping you learn more about common conditions.”

Google’s main focus in delivering the service is on mobile search, the spokesman said. The company sees this as a way to enhance the mobile search experience for users of Android and iOS devices. But the information will be available to users on desktop, tablet and mobile platforms, he said. “Everyone in U.S. English will see it within the next day or two,” but Google will eventually make the information available to users globally, he said.

The impetus for the effort comes from the high interest in health information by users of Google Search, Ramaswami noted. Roughly, 1 in 20 of all Google searches are health-information related, he said.

According to a survey by the Pew Research Center, more than 70 percent of all Internet users say they have searched online for health-related information on specific diseases and treatment procedures. Of those users, nearly 80 percent said they began their research with search engines like Google, Bing and Yahoo, while about 13 percent said they started with a specialized site like WebMD.

The Pew survey showed that caregivers and people with chronic illnesses such as heart disease, diabetes and cancer were more likely to use the Internet to search for others with similar problems, post questions about their condition, and read or watch commentary from others. Clinicians and primary care physicians though continue to be the top source of health care information for most Americans, at least the last time Pew did the survey in 2012.