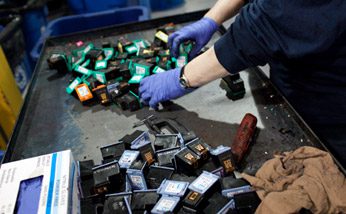 A longtime problem involving printing is the amount of waste it creates. While almost everyone is familiar with recycling paper, printer supplies—such as inkjet cartridges—often end up in the trash.

But if those old inkjet (or toner) cartridges came from any of Hewlett-Packard’s printers, there’s a non-polluting home for them, far from a landfill site.

In partnership with Montreal-based Lavergne Group, HP has developed a way to turn those old cartridges into fresh new ones, thanks to a process called closed-loop recycling.

It’s not as easy as it sounds, however. There are many types of plastic, and they can’t be mixed. Although HP offers free recycling of its toner and inkjet cartridges through its Planet Partners program, not everyone takes advantage of it. Result: a shortage of suitable recycled plastic.

That’s where Lavergne comes in. The company discovered that the plastic from water bottles, along with a secret mix of additives, would combine with plastic from many of HP’s inkjet cartridges—those made from a plastic known as PET—and create a material so close to virgin plastic that it could be used in the existing manufacturing equipment designed for use with new raw materials. No expensive refitting is required.

Research began in 2000, and the first cartridge rolled off the line in 2005. Since then, more than 1 billion inkjet cartridges have been manufactured with material from the closed-loop process.

The companies are not resting on their laurels, however. They have now turned to the development of processes for recycling the polypropylene plastic used in some HP business printers’ ink reservoirs.

How the Process Works

Let’s follow an inkjet cartridge and see what happens after an eco-conscious user sends it back:

–In North America, old inkjet cartridges arrive in a plant near Nashville, Tenn. (HP services Europe and Asia from Germany.)

–Workers sort the returns by type and remove any foreign items that came along for the ride. During a tour of the plant, I saw all sorts of detritus (disintegrated or eroded matter) come out of the packages, including other brands of cartridges (not usable because the plastic isn’t right), and even old cell phones. Sadly, they can’t be recycled, but are sent off for eco-friendly disposal.

–The HP cartridges are then de-manufactured. De-manufacturing sounds a bit counter-intuitive; it requires cartridge-specific equipment to dismember one properly. But it’s more environmentally friendly and yields 50 percent more usable materials than by merely shredding the used cartridges.

–Labels come off, the cartridges are disassembled, and the circuitry and the foam holding the ink residue are separated from the plastic shell. HP is currently working on ways to salvage the ink and foam; currently they’re simply trashed. The metal goes to a smelter for reclamation.

–The plastic shells are then washed, shredded and sent off to Montreal.

From ‘Plastic Spaghetti’ to a New Cartridge

In Lavergne’s plant, first the clean shredded plastic goes into a giant mixer, along with post-consumer plastic from water bottles, and the special additives. It tumbles for six hours to ensure each 20-ton batch is properly mixed before it heads off to an extruder. There, it’s heated to 575 degrees Fahrenheit and forced through nozzles to become what Lavergne’s CEO, Jean-Luc Lavergne, described as plastic spaghetti.

From the extruder, the strands go through a trough of water to cool them, and then they are crushed. The crushed material is sent through a de-metalizer to get rid of anything that isn’t plastic. Because HP needs especially pure plastic, the material goes through the machine up to four times. Rejected material isn’t wasted; it can be used for other purposes.

We now have what ought to be usable plastic, but the process isn’t complete yet. Samples of plastic from each batch are run through an injection molding machine, with outputs tested to ensure that they’re up to ISO spec. That, says Lavergne, is typical in the virgin plastic world, but not in recycling.

The company also performs additional tests to ensure the plastic can endure the high temperatures generated in a printhead.

Assuming all tests are passed, the now-pristine recycled plastic heads off to be made into brand new inkjet cartridges. Hopefully they are to return someday for another trip through the recycling process.