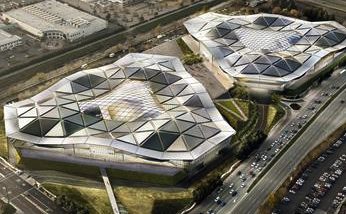 Twenty years after the founding graphics processing unit (GPU) manufacturer Nvidia, the company is building a new headquarters, and is turning to architectural firm Gensler for a building campus that aims to raise the bar for corporate architectural identity—a standard already set high by Apple’s plans for a futuristic, ring-shaped HQ of its own.

What once began as a three-person startup has grown to 8,000 staff across 40-plus sites, with employees in major cities around the world, including Taipei, Helsinki, Shanghai, Paris, Beijing, Boston, Hong Kong, Bangalore, Tokyo, Moscow, Cambridge, Sophia, and others.

In the meantime, the company’s headquarters in Santa Clara, just a few blocks from where Nvidia started, barely has a spare desk, according to a blog post written by the company’s co-founder, president and CEO Jen-Hsun Huang.

“We’re absolutely bursting at the seams. So, we’ve decided to build a new campus right across the street, one as distinctive as our company,” he wrote. “The new Nvidia building will capture the ambition and imagination of our people. It will stand at the intersection of science and art, just as our work in visual computing does. It will be the symbol, the physical manifestation, of our vision for the company.”

In order to carry this grand vision into concrete (and steel and glass) reality, young Harvard-trained architect Hao Ko, design director for Gensler’s San Francisco architecture studio and a member of the U.S. Green building council, will lead the project.

“The design harmonizes smart functionality and a shape that connects with and inspires our employees – a triangle, the fundamental building block of computer graphics. Efficient in every way, the design is thoughtful in its use of space, energy, and environment, and, of course, cost,” Huang’s post read. “Its vast open floors will facilitate our cross-functional work. The nature of building our products requires experts from multiple disciplines to come together, and this building is designed above all for collaboration.”

While it’s easy to think of the world’s technology corporations as big, faceless companies housed in drab buildings far out in suburban areas, some of today’s leading technological institutions—be they educational or commercial—are bucking the vanilla-box trend and experimenting with architectural designs meant to evoke the spirit of their products and their corporate image.

More than two years ago, consumer electronics titan Apple released plans for a building designed by noted British architect Norman Foster. The environmentally friendly, four-story ring-shaped structure will feature underground parking, which will make the overall property about 80 percent landscape, with a proposed 7,000 trees. Other facilities will include research and development areas and a fitness center.