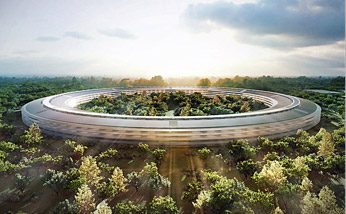 If nothing else, Apple is known for its slavish attention to detail—however small. That philosophy would seem to extend to the company’s futuristic new headquarters in Cupertino, Calif., which some have likened to a spaceship because of the building’s curved design.

In the pursuit of perfection, the building’s planned completion date has been bumped to mid-2016, according to a report in Bloomberg News. Delays in submitting proposals to the city council pushed back the projected move-in date from 2015, although the main building’s design has not been changed.

Revisions include an additional building that will house utility equipment, revamped landscaping and the relocation of a 1,000-seat auditorium. An additional construction revision would allow the company to construct the building without having to truck out any excavated dirt.

“They could conceivably break ground in 2013, but only if everything goes smoothly,” Cupertino’s city manager David Brandt told Bloomberg News. “The project is running a little bit slow. There’s nothing super-significant. I think they are just constantly trying to improve the project.”

Two years ago, Apple purchased a 98-acre tract of land on the site of technology rival Hewlett-Packard’s former headquarters for the building. Four months before his passing, Apple co-founder Steve Jobs unveiled formal plans for the building’s design, which will embrace many of the minimalist design cues that define Apple’s retail stores, including heavy use of glass.

Designed by noted British architect Norman Foster, the environmentally friendly, four-story ring-shaped structure will feature underground parking, which will make the overall property about 80 percent landscape, with a proposed 7,000 trees. Other facilities will include research and development areas and a fitness center.

Apple’s current Cupertino campus holds fewer than 3,000 employees, while the new campus could house up to 12,000 employees. At the time of the city proposal in 2011, Jobs spoke in bombastic terms about the design. “It’s a pretty amazing building,” he told the council. “It’s a little like a spaceship landed.”

While it’s easy to think of the world’s technology corporations as big, faceless companies housed in drab buildings far out in suburban areas, some of today’s leading technological institutions—be they educational or commercial—are bucking the vanilla-box trend and experimenting with architectural designs meant to evoke the spirit of their products and their corporate image.

Facebook’s new campus will emphasize (what else?) a sense of community and will be thoughtful of its youthful employees, while Google, Microsoft and Salesforce.com are focusing on reducing their carbon footprint and burnishing their green technology credentials.

Not all of the most inspired architecture is found in the United States, however. To name just a few, Giant Interactive’s Shanghai headquarters in China looks like it dropped out of the Blade Runner universe, and the Sony Center complex in Berlin—which opened way back in 2000—feels like a cross between Times Square and a giant circus tent.