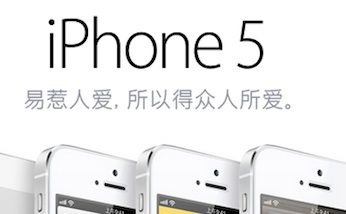 Apple has offered an apology to customers on the home page of its site in China, and announced several changes to its repair policies.

The apology, signed by CEO Tim Cook, follows criticisms from the China Consumers’ Association, a consumer-interest group that has accused Apple of treating Chinese customers differently from others around the world.

Apple offers a one-year warranty on the iPad, though Chinese law demands two-year warranties on major computer components. Apple gets around the law by not referring to the iPad as a portable computer, though in other regions—such as the European Union—Apple has honored local warranty rules that are stricter than its in-house policies, as Fortune magazine has pointed out.

“Apple Inc. was told to equalize the warranty periods in China compared with other countries,” China.org.cn reported March 31. “Buyers of iPads, after the company admitted the device is classifiable as a portable computer, are entitled to two-year after-sale service packages for its key components.”

Apple was also criticized for its supposed policy of repairing devices with used parts.

In his letter, Cook detailed Apple’s policies regarding iPhone 5, 4S and 4 repairs—all receive new replacement parts and have a warranty of one year—and Apple’s official repair and warranty policy. He added—according to a Google Translated version of the site—that Apple plans to “increase the intensity” of the supervision and training of its service providers and offered a link to Apple’s feedback service.

He offered his thanks for the valuable feedback that’s been provided to Apple and said that the company has “immense respect” for China and the Chinese people.

Cook’s letter also clarifies that all iPad major components have a two-year warranty, while the accessories and batteries have a one-year warranty.

While the gripe may be legitimate, the force behind it may be manipulated, according to reports.

Some Chinese consumers, reports Cult of Mac, believe the effort to be part of a larger campaign to drive the increasingly powerful Apple out of China. China’s State Administration for Industry and Commerce last week called on agencies across China to “crack down on Apple,” a Chinese film studio founded by the Communist party reportedly has sued Apple for selling its animated films on iTunes, and China’s General Administration of Quality Supervision, Inspection and Quarantine has now ordered Apple to double its warranty to two years.

Cult of Mac has also reported on the “820 Party,” an apparent effort by the Chinese government to enlist celebrities to bad-talk Apple. One such effort backfired when a popular singer and actor ended his Tweet with, “Need to post around 8:20 p.m.,” a line widely thought to be not part of the intended Tweet but the instructions sent to him.

One line of thinking is that China’s pursuit of Apple comes as payback for the U.S. government singling out Chinese brands ZTE and Huawei as possible threats to U.S. national security. An October 2012 U.S. House Intelligence Committee report warned that the pair had been given extensive opportunities to clear up U.S. concerns but had ultimately been opaque and uncooperative.

The U.S. government’s position on the Chinese brands was recently highlighted as Sprint and Japanese carrier Softbank seek to complete a deal that would give Softbank 70 percent controlling power of the U.S.’s third-largest network. A condition of the deal is expected to be that the U.S. government will receive the right to approve network equipment purchases, The Wall Street Journal reported March 28.

Though ZTE and Huawei were unnamed, fears regarding their equipment are widely considered the motivation behind the condition. The chairman of the committee that released the U.S. report said in a statement that a “bug, beacon or backdoor” in equipment could “allow for a catastrophic and devastating domino effect of failures through our networks.”

It’s also been proposed that the Chinese government sees Apple, as it did Google, as a threat to its agenda. Google, which offered an open Internet to Chinese consumers, was “persistently and expertly hacked” from inside China, Cult of Mac has reported, which ultimately contributed to Google’s decision to close its Beijing office and mainland China version of Google Search.

“To radically over-simplify the Google-China crisis of 2009, China appears to have decided that Google was a problem. They harassed, hacked, threatened and squeezed Google until they got what they wanted: No uncensored Google internally; no majority search market share for a foreign company,” Cult of Mac reported March 16, adding, “Is Apple next?”

Apple released a statement following the CCTV broadcast, saying that it is dedicated to making first-class products and attaches high importance to every consumer’s ideas.

China is now the world’s largest market for smartphones and tablets. China is currently Apple’s second-largest revenue-generating market, but CEO Tim Cook has said that he believes “strongly” that it will become Apple’s leading market.

“We are growing very fast. We are continuing to invest in retail stores here and will open many more over the next several years,” Cook said during a January visit to China, the Zinhau News Agency reported. “It’s a very, very important country to us.”